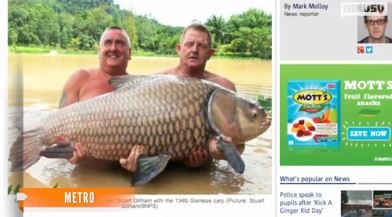 A world-record carp was caught by Keith Williams, a British tourist in Thailand.

Williams, of Carshalton in Surrey, caught the carp at a fishing resort in Krabi in Thailand.

He spent 25 minutes catching it.

“Keith came out to stay with us with a group of friends to celebrate his 56th birthday,’ explained resort owner Stuart Gillham to Metro. “He told his wife that he could feel in his bones that he was going to catch a special fish that day.”

“His reaction was one of total shock – he said never in his wildest dreams did he imagine he would catch a world record,” Gillham added.