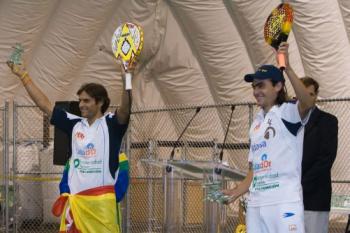 Gustavo “Gata” Briner and his teammate Damien Diez from Argentina with their second place Inukshuk-shaped trophies. Gustavo was kind enough to do an interview with us almost every day of the championship. (Neil Campbell/The Epoch Times)
News

CALGARY—The 2008 World Paddle Tennis Championships have been a pleasure to cover as players from all over the world introduced Canada to this unique, fast-paced and intriguing sport, one which most Canadians have never heard of.

The players certainly brought their Latin hospitality, and their (very loud) enthusiasm to Calgary for the event, which means significantly more to them than it does to North Americans. In Latin America, paddle tennis is played by millions of people and is therefore a significant matter of national pride and honor.

As Spain’s David Losada said in an interview with The Epoch Times, back home the World Championship in this sport is “the biggest thing.”

Throughout the championship, players and organizers were routinely heard expressing the sincere hope that the sport would catch on overseas and grow in popularity.

For them it is a passion, something they really work hard at and put their heart into, and it shows in the way they carry themselves and the enthusiasm with which they play.

For the spectator, paddle tennis is fast-paced and exciting to watch. To find out more about the sport go to: http://www.usapadel.com or http://www.paddlecanada.net