World Must ‘Wake Up to the Challenges’ Posed by Chinese Regime, US Defense Secretary Says 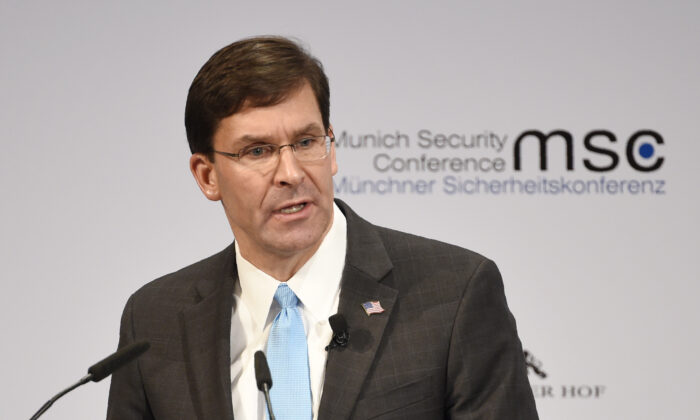 “The Communist Party and its associated organs … are increasingly operating in theaters outside its borders, including Europe, and seeking advantage by any means, and at any cost,” he told the world’s leading policymakers on Feb. 15 at the Munich Security Conference in Germany.

“While we often doubt the transparency and forthrightness of Beijing, when it comes to their security aims, we should take the Chinese government at its word,” he said, citing the Beijing regime’s ambition to complete military modernization by 2035, and to assert preeminent military power in Asia by 2049.

Esper said that it is essential for the international community to “wake up to the challenges” as the Chinese Communist Party heads “even faster and further in the wrong direction,” through “internal repression, more predatory economic practices,” and a “more aggressive posture.”

He called out Huawei, the Chinese telecom giant, as one such example and a “poster child” for the regime’s rampant technology theft.

Huawei has been at the forefront of the 5G development and has sought to export 5G networks worldwide. U.S. officials and lawmakers have sounded the alarm that company’s equipment poses an espionage risk due to the company’s close ties with the Chinese military; in addition, Chinese law compels companies to cooperate with intelligence agencies when asked.

Esper warned that reliance on Chinese 5G vendors such as Huawei could compromise a nation’s critical infrastructure.

The 16-count superseding indictment accuses the company of “decades-long efforts” to misappropriate sensitive data from six U.S. tech firms for the purpose of growing its own business. Part of the scheme, according to the court document, involves issuing financial incentives to employees to encourage them to steal confidential information, recruiting staff members of competitors, and using proxies such as professors to access data from research institutions.

Esper encouraged tech companies and U.S. partners to develop alternatives to Huawei, cautioning that many economic decisions ultimately impact on national security. He said that allowing Huawei into critical national systems could jeopardize intelligence sharing and cast a shadow on Western alliances.

“In the long run, developing our own secure 5G networks will far outweigh any perceived gains from partnering with heavily subsidized Chinese providers that ultimately answer to Party leadership,” he said.

Esper also highlighted the One Belt, One Road Initiative (OBOR, or Belt and Road), China’s ambitious global infrastructure financing project, as a way for Beijing to coerce other countries into “sub-optimal security decisions.”

OBOR has drawn criticism for being a “debt trap policy” for its opaque terms, and saddling developing countries with heavy debt burdens that they may not be able to repay.

While the United States “does not want an adversarial relationship with China,” the regime needs to change its policies and “behave like a normal country that adheres to international rules and order,” Esper said.