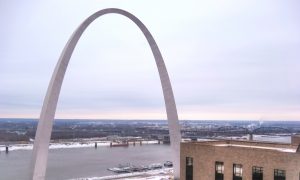 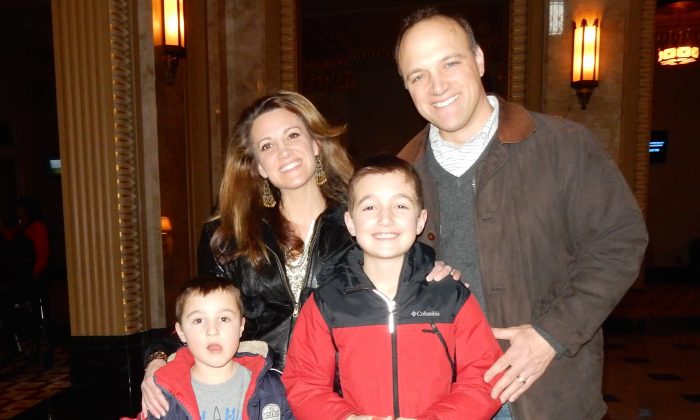 Dan and Wendy Kapsak with their sons at Shen Yun Performing Arts at the Peabody Opera House, on Feb. 21, 2015. (Stacy Chen/Epoch Times)
Company

ST. LOUIS—In its second of four performances at the Peabody Opera House, Shen Yun Performing Arts imparted a common theme among many of the theatergoers attending the matinee performance on Feb. 21. The idea that the world needs more truthfulness, compassion, and tolerance seemed to resonate with the audience.

Dan Kapsak, attorney for U.S. attorney’s office, came this afternoon with his wife, Wendy. He said he would highly recommend the performance to his family and friends, not only for entertainment’s sake but also for the content and message therein.

Shen Yun Performing Arts is a New York-based company. According to its website, “In 2006, a group of leading classical Chinese artists came together in New York with one wish: to revive the true, divinely inspired culture of China and share it with the world.”

“China’s deep cultural traditions are contained in classical Chinese dance, allowing its movements to be richly expressive, such that the personalities and feelings of characters can be portrayed with unparalleled clarity,” the company’s website states.

Noah Mizell, who works at Christian North Hospital of Grant City, in the ER registration, commented, “Some of the stories were about tolerance and you know, not judging and secluding anybody, and living life to the fullest. It definitely captured the essence of what you would call how they’d like to be. It was interesting.”

If the world took on the message he believes Shen Yun conveyed to him today, Mr. Mizell sees the hope that it could still become a better place. “I think a lot of tolerance and including everybody could be very well incorporated into today’s world, especially with all the unrest that is going on throughout the country and throughout the world.”

Thinking back to one of the segments of the program called The Power of Compassion Mr. Kapsak said, “I think the world needs a lot more of that. I think it’s [a] universal aspect, across an array of religions, but also an array of cultures, and that’s one that really jumped out to me. Truthfulness also as well.”

Computer company supervisor, Jaudon White’s take on the underlying theme of the performance was that the idea of diversity was prevalent and that having a universal openness is paramount. “You have to adjust and take that all into consideration and be a little bit more compassionate and understanding of others,” he said.

Steve Title, retired employee of Boeing McDonald Douglas, said he had chills at times while watching the dance, The Power of Compassion which tells about the persecution of a traditional meditation group in China today. He had chills because he thought it was Tiananmen Square protests revisited.

Mr. Title said he would definitely recommend Shen Yun, and that he feels seeing it would help people of different nations and nationalities understand one another. “I think it would help relations all over,” he said.