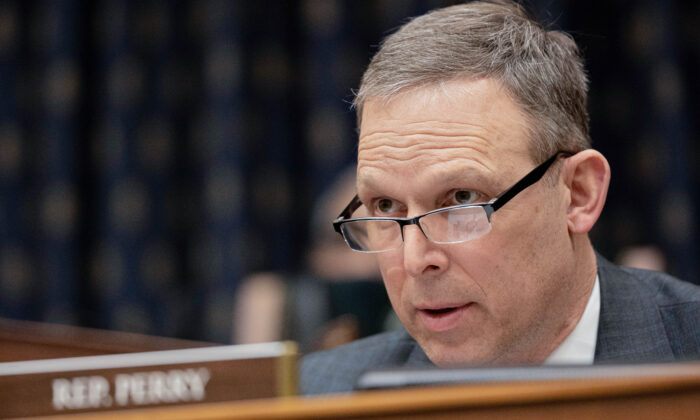 The Chinese Communist Party has industrialized the murder of prisoners of conscience for their organs, a practice that must be stopped, a group of lawmakers from the United States and other countries said on International Human Rights Day.

“These are living people having their organs taken from them,” Rep. Scott Perry (R-Pa.) said at a Dec. 10 webinar hosted by Doctors Against Forced Organ Harvesting, a Washington-based medical ethics group.

“We must challenge the evil designs of the Chinese Communist Party, which entails highlighting its wanton disregard for basic standards of human decency.”

The Chinese regime has for years been engaging in forced organ harvesting of prisoners of conscience on a “substantial scale,” a 2019 independent people’s tribunal determined. The practice involves prisoners’ organs being carved out while they’re still alive, and then sold to locals and tourists seeking a transplant, a gruesome business that amasses significant gains for the regime.

The main source of the organs is imprisoned Falun Gong practitioners, the tribunal found, adding that it found no evidence that the Chinese Communist Party (CCP) has ceased its behavior.

Falun Gong is a spiritual discipline featuring a set of moral teachings based on the principles of truthfulness, compassion, and tolerance, along with a set of meditative exercises. It grew to about 70 million to 100 million adherents in China by 1999, when the regime deemed its vast popularity a threat and ordered an expansive campaign to eradicate the group.

Millions from the group have suffered in various torture and detention facilities over the two decades since.

Perry, who described the CCP’s persecution of Falun Gong adherents as “evil and perverse,” said that in the coming days, he will be unveiling a proposal that would hold the perpetrators of forced organ harvesting to account.

An exhibition titled “Real Bodies,” which has toured around the world showcasing plastinated body parts sourced from China, has raised troubling questions. The body parts are sourced from Dalian, a city in northeastern China known for the severity of local officials’ persecution of Falun Gong practitioners.

Philip Hunt, a member of the UK House of Lords, recalled one such exhibition on display in his hometown of Birmingham in 2018. While advertised as a “thought-provoking” way to “explore the inner workings of the human form,” those bodies were used without clear evidence of consent, he said.

He added that until 2013, Dalian had been home to a forced labor camp tasked with torturing Falun Gong detainees.

Hunt introduced the Organ Tourism and Cadavers on Display Bill, seeking to halt the “dreadful traveling circus of body exhibitions” and prevent UK citizens from traveling to China for organ transplantation. The bill went through its second reading in the House of Lords in July but has yet to be approved.

“The commercial exploitation of body parts in all its forms is surely unethical and unsavory. When it is combined with mass killing by an authoritarian state, we cannot stand by and do nothing,” Hunt said during the webinar.

Forced organ harvesting, he said, is “commercialized murder and, without doubt, among the worst of crimes.”

While the CCP’s oppression of Uygurs and other Muslim minorities in Xinjiang has been determined to be a genocide by various official bodies, the regime’s persecution of Falun Gong hasn’t been adequately addressed, according to Perry. Some experts have described the campaign, including the state-sanctioned forced organ harvesting, as genocidal.

A definition of the nature of the regime’s campaign against Falun Gong is “sorely missing” in the United States’ China policy, Perry said. His bill would push the U.S. State Department to formally decide whether the persecution constitutes crimes against humanity and genocide, he said.

To end these ongoing abuses, people who have the freedom need to speak out, said Garnett Genuis, a member of Canada’s Parliament.

Genuis’s grandmother is a Holocaust survivor who wouldn’t have lived without the help of sympathetic locals, who provided shelter and vocally opposed the killing, he said.

After World War II, the world vowed to “never again” allow a repeat of those horrific abuses. But it failed in this, and now has a responsibility to “intervene while we still can, to do what we can to make good on that promise,” Genuis said.

Annick Ponthier, a Belgian politician, first learned about organ harvesting in 2020 after viewing the ruling of the 2019 tribunal. She now wants her country, and the European Union at large, to end investment deals with China to avoid becoming “accomplices in the big crimes they commit.”

Beijing’s authorities “have no regard for human life if those lives don’t further their internal communist agenda, and their ambitions to become a global superpower,” she said.

With the regime having no intention of limiting its authoritarian model within Chinese borders, she said, a stance against the Chinese Communist Party “becomes a stance for human rights around the world.”