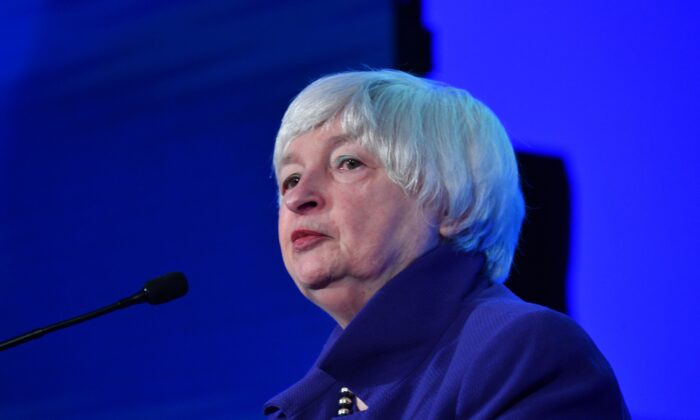 The Chinese Communist Party (CCP) shouldn’t expect future claims to sovereignty to carry any weight with the international community if Beijing continues to undermine the sovereignty of Ukraine, according to U.S. Treasury Secretary Janet Yellen.

“Whatever China’s geopolitical aims and strategies, we see no benign interpretation of Russia’s invasion nor of its consequences for the international order,” Yellen said during an address to the Atlantic Council, a Washington-based think tank.

“China cannot expect the global community to respect its appeals to the principles of sovereignty and territorial integrity in the future if it does not respect these principles now, when it counts.”

Yellen’s comments were in reference to the CCP’s continued refusal to join multilateral sanctions against the regime of Vladimir Putin for its invasion of Ukraine and Beijing’s refusal to denounce Russia’s aggression.

The CCP has instead opted to deepen ties with Russia, actively censor media and online discussion in the Chinese mainland that is critical of Moscow, and has repeated Russian propaganda that the war is the fault of the United States and NATO.

Yellen also noted that it’s becoming increasingly difficult to separate economic and security interests in the global economy, and that if the CCP doesn’t work to correct course on the Russia issue, the international community could move away from commercial ties with China.

To that end, Yellen warned that China’s communist leadership should be aware that the international willingness to integrate China economically would be dependent on compliance with the multilateral demand for Russia to end its war.

“We cannot allow countries to use their market position in key raw materials, technologies, or products, to have the power to disrupt our economy or exercise unwanted geopolitical leverage,” she said.

She then called for the United States and its allies to engage in “friend-shoring,” or moving services and trade relationships to other open democratic societies and away from authoritarian regimes such as China under the CCP.

Under such a strategy, the United States would diversify its suppliers among nations that are well-integrated in the international community and act in accordance with international rules and norms.

“Let’s be clear,” Yellen said, “the unified coalition of sanctioning countries will not be indifferent to actions that undermine the sanctions we have put in place.”

Yellen also described the apparent efforts by Beijing to profit off the crisis by continuing to trade with Russia as “short-sighted,” and said that “China has benefited enormously from being part of a global system, a rules-based multilateral system.”

To that end, Yellen said China should use its “pivotal role” to persuade Russia to end the war in Ukraine and to prevent the further decoupling of Western economies from China.

“China has long claimed to hold sacrosanct key international principles including those enshrined in the U.N. charter with respect to sovereignty and territorial integrity,” Yellen said.

“China has recently reaffirmed a ‘special relationship’ with Russia. I fervently hope that China will make something positive of this relationship and help to end this war.”