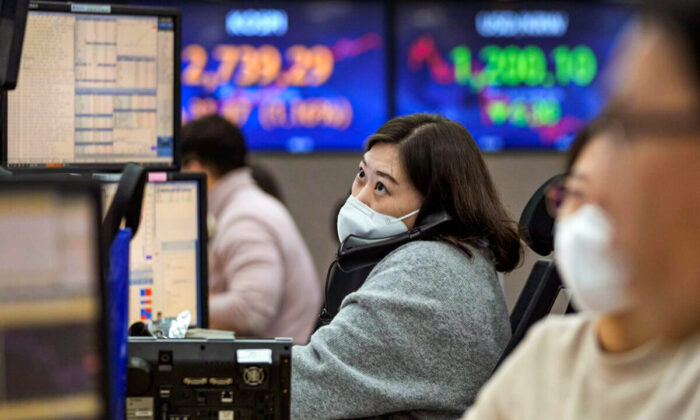 BANGKOK—Shares in Europe and Asia were mostly higher Friday after a historic plunge in the stock price of Facebook’s parent company yanked other tech stocks lower on Wall Street.

But world markets were little affected. Trading has been relatively muted this week, with Chinese markets closed and coronavirus cases still surging in Asia, especially in Japan and Hong Kong.

“Unfortunately, coronavirus is dragging on like ground hog day and touching all of us,” Shane Oliver of AMP Capital said in a commentary.

Investors will get updates on U.S. jobs with the Labor Department’s monthly report for January on Friday. Fresh inflation data are due next week.

On Wall Street, the future for the S&P 500 jumped 0.8 percent, while the contract for the Dow future was up 0.3 percent.

On Thursday, the S&P 500 fell 2.4 percent, its biggest drop in nearly a year, weighed down by the 26.4 percent wipeout in Meta Platforms, as Facebook’s owner is now known. It erased more than $230 billion in market value, easily the biggest one-day loss in history for a U.S. company. The stocks of other social media companies including Twitter and Snap also fell.

The Dow industrials lost 1.5 percent and the tech-focused Nasdaq composite gave up 3.7 percent, its biggest loss since September 2020. The Russell 2000 index of small caps lost 1.9 percent.

The retreat ended a four-day winning streak for the market.

Big technology and communications companies played a big role in driving gains for the broader market throughout the pandemic and much of the recovery in 2021. But investors have been shifting money in expectation of rising interest rates, which make shares in high-flying tech companies and other expensive growth stocks relatively less attractive.

The Federal Reserve is planning its first interest rate hike in March, aiming to tamp down inflation that has surged to 40-year highs. Those higher costs will likely persist until supply chains loosen and help ease costs for businesses and perhaps lower prices for consumers.

Brent crude, the basis for pricing international oils, gained 94 cents to $92.05 per gallon.