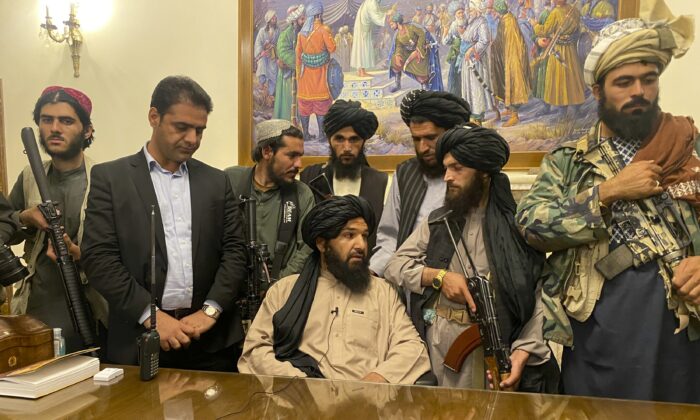 World leaders expressed shock and dismay after the Taliban took over Kabul, Afghanistan’s capital, following swift advances that caught the United States off guard as it was withdrawing from the country.

UK Prime Minister Boris Johnson described the Taliban takeover as “extremely difficult,” noting that it’s “very important the West collectively should work together to get over to that new government, be it by the Taliban or anybody else.” He said that “nobody wants Afghanistan, once again, to be a breeding ground for terror.”

Johnson noted that it was “fair to say” the White House’s move to withdraw “accelerated things, but this has in many ways been a chronicle of an event foretold.”

U.N. Secretary-General Antonio Guterres called on the Taliban on Aug. 15 to “exercise utmost restraint” in Afghanistan,  just hours after the group entered Kabul and later, the presidential palace.

Guterres “is particularly concerned about the future of women and girls, whose hard-won rights must be protected,” according to a U.N. statement.

Over the weekend, the U.N. stated that its Security Council would meet on Aug. 16 to discuss the situation in the country.

“Surely the West has made mistakes and it is correct to admit it,” di Maio told the newspaper, according to translation.

“We’ve been constantly monitoring the rapidly evolving situation,” Trudeau said. “We are heartbroken at the situation the Afghan people find themselves in today.”

Australian Prime Minister Scott Morrison noted that the government would work to evacuate people still in Afghanistan, namely those who aided the Australian effort in the country.

“Our focus now is to ensure that we continue to support those who have aided us and ensuring that 400 people have already been brought to Australia as we have been working on this quite rapidly in recent months as the situation continues to deteriorate,” Morrison said. “We will continue to redouble our effort in that regard with our partners.”

Speaking on Aug. 16, German Chancellor Angela Merkel told reporters that as many as 10,000 people have to be urgently evacuated from Afghanistan by the German government. They include Afghan translators, human rights activists, and lawyers.

“We are witnessing difficult times,” Merkel said. “Now we must focus on the rescue mission.”

President Joe Biden, who announced last month that the United States would withdraw after 20 years, hasn’t issued any televised addresses in recent days. Last week, the White House released a statement that partially blamed former President Donald Trump for attempting to negotiate with the Taliban to exit Afghanistan.

Within the United States, Republican lawmakers and even some Democrats sharply criticized the White House for how it handled the situation, comparing the withdrawal to the 1975 fall of Saigon that capped the end of the Vietnam War.

The White House hasn’t said whether Biden will issue another statement on the deteriorating situation.