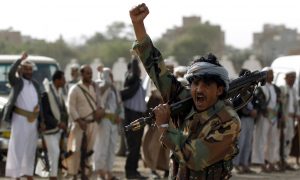 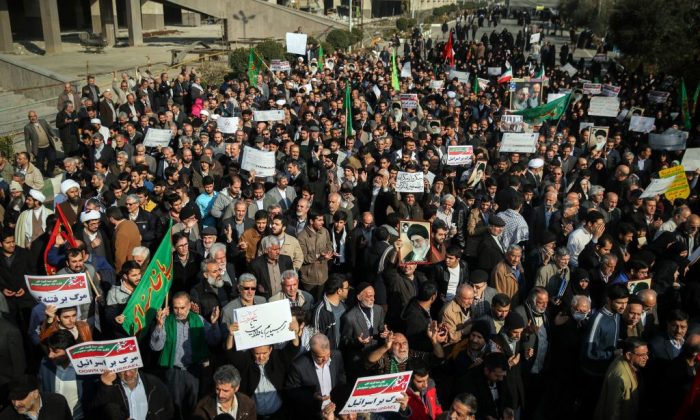 Iranians chant slogans as they march in support of the government near the Imam Khomeini grand mosque in the capital Tehran on Dec. 30, 2017. Tens of thousands of regime supporters marched in cities across Iran in a show of strength for the regime after two days of angry protests directed against the country's religious rulers. (Hamed Malekpour/AFP/Getty Images)
Middle East

Hundreds of people took to the streets there on Thursday to protest against high prices and shouted anti-government slogans.

On Friday, police dispersed anti-government demonstrators in the western city of Kermanshah as protests spread to Tehran and several other cities in the largest wave of demonstrations since nationwide pro-reform unrest in 2009.

Police arrested 52 people in Thursday’s protests, according to a judicial official in Mashhad, one of the holiest places in Shi’ite Islam.

The United States condemned the arrests, with President Donald Trump tweeting: “Iranian govt should respect their people’s rights, including right to express themselves. The world is watching!”

The outbreak of unrest reflects growing discontent over rising prices and alleged corruption, as well as concern about the Islamic Republic’s costly involvement in regional conflicts such as those in Syria and Iraq.

The Revolutionary Guards, which along with its Basij militia spearheaded a crackdown against protesters in 2009, said in a statement carried by state media that there were efforts to repeat that year’s unrest but added: “The Iranian nation …will not allow the country to be hurt.”

State television said rallies were scheduled to be held in more than 1,200 cities and towns on Saturday. The events have been held annually since 2009.

Openly political protests are rare in Iran, where security services are omnipresent.

However, demonstrations are often held by workers over lay-offs or non-payment of salaries and by people who hold deposits in non-regulated, bankrupt financial institutions.

Vice-President Eshaq Jahangiri, a close ally of President Hassan Rouhani, said of the protests, “Those who are behind such events will burn their own fingers,” according to state media.

Rouhani’s leading achievement, a 2015 deal with world powers that curbed Iran’s disputed nuclear program in return for a lifting of most international sanctions, has yet to bring the broad economic benefits the government says are coming.