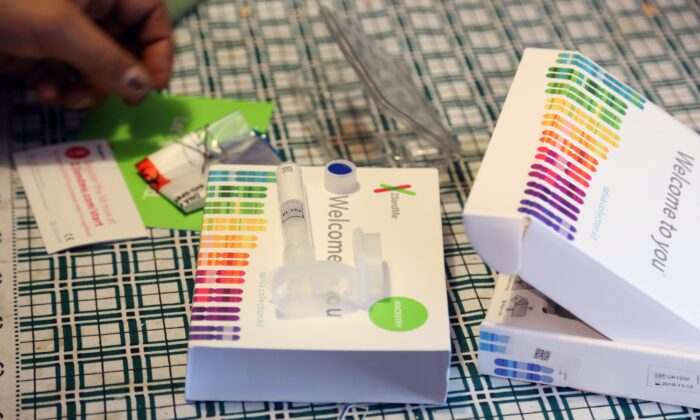 Chilean Josefina Sandoval opens a DNA test kit in Santiago, on June 10, 2018. Sandoval is looking for her daughter who was born on June 24, 1980, during Augusto Pinochet's dictatorship, which saw the irregular adoption of thousands of children who were sent abroad. (CLAUDIO REYES/AFP via Getty Images)
Australia

The Australian government is launching a world-first DNA screening study with the aim of detecting increased risk of some cancers and heart disease.

Melbourne’s Monash University will lead a national screening program of at least 10,000 people aged 18-40, who will be tested for genes that increase the risk of certain types of cancers and heart disease that often go undetected.

Supported by researchers and clinicians across the country, DNA Screen will identify people with variants in the BRCA1 and BRCA2 genes that lead to an increased risk of hereditary breast and ovarian cancer in women.

These genes are also linked to breast and prostate cancer in men, although not as strongly.

Men and women who carry DNA variants in the BRCA1 and BRCA2 genes can also pass them onto their children.

The test is free and involves placing a saliva sample into a small tube received by mail, and sending it back in a postage paid envelope.

Researchers, who are recruiting young people through social media, say the screening could ultimately save countless lives.

“We expect to identify about one in 75 people at high risk of these diseases,” Monash University’s co-lead for the national project Jane Tiller said.

“Those found to be high risk won’t necessarily get the disease, but pinpointing risk before symptoms appear enables prevention through regular check-ups, medication, or risk-reducing surgery. It could save their life.”

“We hope to identify those at risk while they are young and healthy, not after the fact,” he said.

“For some people, this could save their lives through early detection and prevention of cancer and heart disease. This will also save considerable health system costs in Australia through prevention.”

DNA Screen, which was made possible through a A$2.97 million grant from the federal government’s Medical Research Future Fund, is available to everyone in Australia aged 18-40.