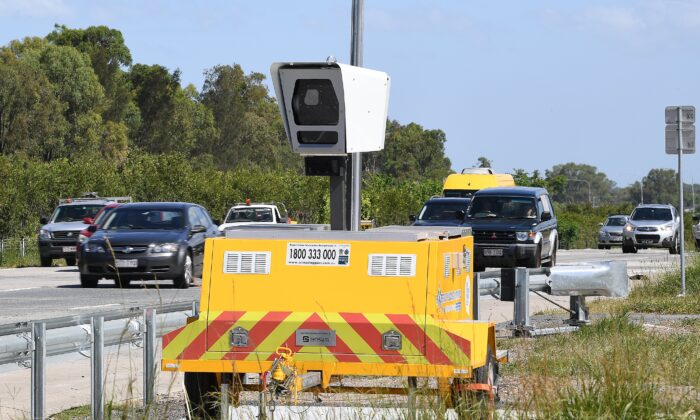 High-risk roads near schools and roadworks in Queensland will soon have increased levels of safety and monitoring when the government begins deploying high-tech pop-up cameras to target drivers disobeying road signs through these areas.

State Transport Minister Mark Bailey announced that the “world-first” portable speed cameras will be set up at random sites, moved around at random times, and go live on Sep. 9.

“These cameras will pop up in high-risk locations next month so I am giving Queenslanders fair warning that these can be anywhere, anytime,” Bailey said in a statement on Aug. 21.

Significant driver data will be collected from the speed cameras, according to Louise Van Ristell, CEO of peak motoring and traffic body, the Traffic Management Association of Australia.

She welcomed the initiative, saying it would provide quality data regarding the number of drivers who disregard speed reduction signage around worksites and pose a risk to traffic controllers and roadworkers.

The Queensland government recently trialled covert cameras which use artificial intelligence software to filter images to detect if a driver is either using a mobile phone, not wearing a seatbelt, or speeding.

“When a vehicle is detected speeding, a photograph is taken, with images of speeding vehicles. Registration details from an offending vehicle are used to identify the vehicle’s owner,” a Transport and Main Roads spokesperson told the Epoch Times.

Speeding is one of the leading causes of fatalities and serious injuries on Queensland’s roads, according to government data. There were 74 speeding-related deaths last year, representing almost 27 per cent of Queensland road fatalities.

“In line with our tough stance on road safety, we have increased penalties,” he said.

“Camera fines are used to fund important road safety initiatives and education across Queensland,” according to Ristell of the Traffic Management Association of Australia.

The revenue from traffic fines is forecast to increase 43.6 percent in 2022-23, driven partly by the introduction of the new detection cameras.