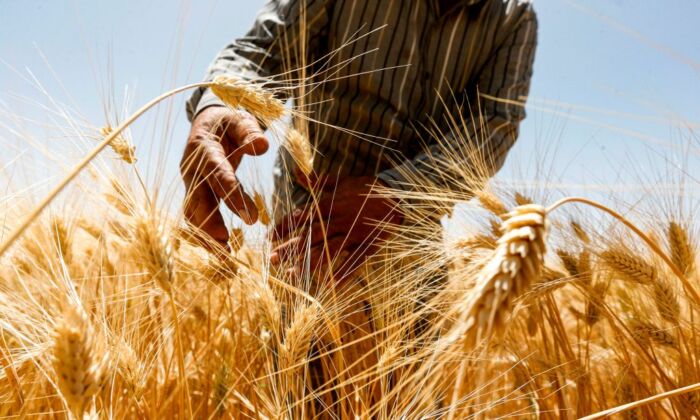 A farmer harvests wheat in a field in the countryside of al-Kaswa, south of Syria's capital Damascus, on June 18, 2020. (Louai Beshara/AFP via Getty Images)
World

Talk of food shortages and empty shelves has been at the forefront of agricultural discussions around the globe for more than two years as production demands have increased and farmers are scrambling to match the pace.

Aggravating the economic aftershocks of the COVID-19 pandemic and supply chain recovery efforts was Russia’s invasion of Ukraine on Feb. 24. That dealt another significant blow to global agriculture, as the conflict involves two of the world’s top wheat producers.

Further impeding global farmers are the limited availability and inflated price of fertilizer.

Russia is one of the world’s largest producers of fertilizer, which was a part of the U.S. sanctions list until March 24, when the Department of the Treasury removed key agricultural items from the embargo because of critical shortages.

However, the move may prove ineffective as Russia’s deputy secretary of the country’s security council, Dmitry Medvedev, announced on April 1 that Moscow wouldn’t sell agricultural products to countries it deemed as “enemies,” effectively weaponizing key commodities.

Prior to the Russia–Ukraine conflict or even the pandemic, it became apparent that there were weak links in the global food chain.

In 2007, food prices skyrocketed because of rising oil costs, explosive demand for corn-based fuels, transportation, financial market speculation, and low grain reserves. At the time, the director-general of the World Food Programme called the combination a “perfect storm.”

Farmers are now facing a sharp rise in demand for food commodities, which could increase by 98 percent by the year 2050. Combined with the pandemic aftermath and war-related sanctions, global agriculture is riding out a new type of storm.

He said these vulnerabilities are the reason the U.S. Department of Agriculture (USDA) is now investing in small- to medium-sized enterprises that process animal-sourced foods.

“When COVID hit, the United States learned that having only a few very large meat processors, although efficient from an individual business perspective, created a vulnerability when one or more of those processors closed temporarily due to worker health issues,” Youngs said.

Ironing out the kinks in the animal-sourced food chain also has proven important in less developed countries, such as those in Africa and Asia, where streamlined livestock operations are directly linked to greater economic and food security.

The USDA invested $3 billion in September to address the challenges and costs associated with market disruptions for commodities and supply chain issues, along with drought and animal health.

During an October investigation, Erkut Sonmez, an associate professor of supply chain management and analytics at the University of Nebraska–Lincoln, said production challenges and supply chain disruptions weren’t going to dissipate. He explained that capacity limitations in the food supply chain exist from start to finish.

“The disruptions to the agricultural supply chains are more apparent and more important compared to other supply chains.

“On one side, we have a shortage of food supply while people are looking for food, and on the other, we have food actually rotting or going bad in containers in some parts of the world,” he explained.

He noted that labor shortages —especially in fresh produce—transportation problems, and raw material shortages on the production end are at the core of the problems in attempting to ramp up food production in the wake of the pandemic.

But the compounding effect of the Russia–Ukraine conflict isn’t to be underestimated, especially in nations that already suffer food insecurity, Youngs says.

Africa, in particular, has a heavy dependence on imported grains from Russia and Ukraine.

“To me, it is quite unsettling that a human decision to engage in war is affecting so many innocent people,” Youngs said.

Small Farming Could Be Key

Fields of less than one hectare (2.47 acres) represent 70 percent of the estimated 600 million farms in the world. Some experts believe that this could become a key factor in increasing global food production and mitigating supply chain disruptions. Additionally, small-scale farming plays an important social and economic role, creating jobs in rural areas and helping reduce poverty in communities.

In Latin America and the Caribbean, 81.3 percent of rural farms belong to families, which accounts for more than 60 million jobs. The main source of employment in rural areas is smallholder farms.

Small farms also account for 78 percent of agro-business in India, which is one of the world’s top food-producing nations.

The United States, China, and Brazil are also among the largest food generators.

Last year, the USDA provided $700 million in economic relief to small farmers in the United States. Small family farms, where the majority of the business is owned by the operator and relatives, made up nearly 91 percent of U.S. farms as of 2021.

In countries such as the United States, smallholder farmers often have outside income that offers unique advantages over their counterparts in less economically developed countries, according to Youngs.

“They can often afford to invest in production practices that enable them to target specialty, niche markets such as the direct-to-restaurant trade or online direct-to-consumer markets,” he said.