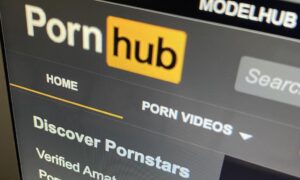 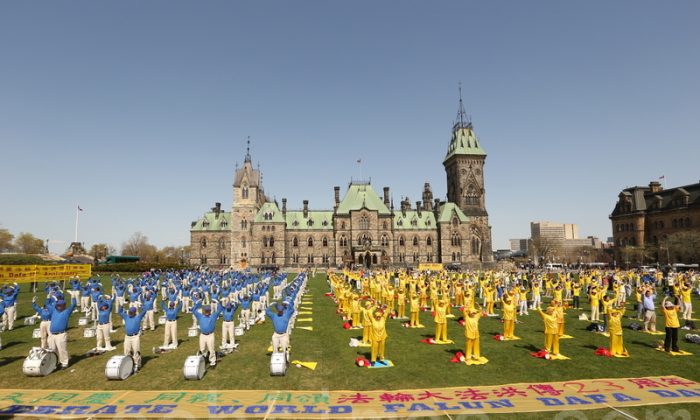 Falun Dafa practitioners, including members of the Tian Guo Marching Band and waist drum team, do their gentle exercise on Parliament Hill in Ottawa on May 6, 2015, to mark World Falun Dafa Day. Some 15 MPs from all national parties and a senator gave speeches of support and encouragement to the practitioners gathered on the Hill for the event, which drew about 600 people. (Epoch Times)
Canada

OTTAWA—Hundreds of Falun Dafa adherents gathered on Parliament Hill May 6 to commemorate the public introduction of their practice in 1992. Members of Parliament from the NDP, Greens, Liberals, and Conservatives lent their support and several ministers sent letters congratulating the group.

This year, World Falun Dafa Day marks the 23rd anniversary of Falun Dafa’s introduction to the public in China by Mr. Li Hongzhi in 1992. Falun Dafa (also called Falun Gong) is an advanced practice of self-cultivation based on the Buddha School of teachings, according to the group’s website FalunDafa.org.

MPs and senators from different parties gave speeches of support and encouragement to the crowd of around 600 gathered on the Hill.

As chair of the Parliamentary Friends of Falun Gong, Conservative MP and former environment minister Peter Kent said Falun Gong has brought spiritual fulfillment and good health to millions of people around the world through its gentle exercises, meditation, and core tenets of truthfulness, compassion, and tolerance.

“Practitioners of Falun Gong in Canada are fully law-abiding citizens and residents who contribute significantly—greatly I must say—to Canadian society,” he said.

Like many of the other dignitaries who spoke at the event, Kent also mentioned the persecution the practice faces in China, where Falun Dafa adherents are subject to arbitrary detention and torture—which has in many cases proven fatal.

He said the Canadian government consistently calls on the Chinese regime to protect the rights of all Chinese citizens including Falun Gong practitioners. He spoke of Li Xiaobo, father of Canadian citizen Paul Li, who was sentenced last month to another eight years in prison for practicing Falun Dafa, having already served a sentence of eight years from 2005 to 2012.

“I can assure you that … diplomatic channels are being used to urge the Chinese government to free Mr. Xiaobo Li,” said Kent.

“We have to send a clear and unequivocal message to the Chinese authorities that it’s not enough to be an economic superpower—that you gain your credentials today in the international community if you behave in accordance with the rule of law.”

Honouring treaty obligations and respecting human rights as well as the principles of truthfulness, compassion, and tolerance—the very values of Falun Dafa—were also necessary on the part of the Chinese regime, he said.

When the world follows the Falun Dafa three key words—truth, compassion, and tolerance—the world will be a better place.
— Liberal MP Judy Sgro

It’s been 10 years that NDP MP and vice-chair of Parliamentary Friends of Falun Gong Wayne Marston has marked Falun Dafa Day on Parliament Hill. Over that time, it’s been clear the Chinese regime has one of the most horrible records in the world of mistreatment of its citizens, he said.

He said there was a glimmer of hope in recent years that a new Chinese leader would end the campaign of persecution begun in 1999, but that never happened.

Marston brought greetings on behalf of NDP leader Thomas Mulcair and pledged that human rights was a lens an NDP government would look through for every decision.

Conservative Senator Thanh Hai Ngo, who was among those who fled Vietnam after a communist regime came to power there, said he was glad to see so many parliamentarians showing their support. He called the persecution of Falun Gong in China one of the biggest crimes against humanity of the century.

“China needs to understand and to accept its peoples’ inviolable right to worship, to believe, to practice their religion. These are all natural rights that human beings are entitled to.”

Estimates vary, but in the 2014 book “The Slaughter: Mass Killings, Organ Harvesting, and China’s Secret Solution to Its Dissident Problem” investigative journalist Ethan Gutmann estimated at least 65,000 Falun Gong practitioners have been killed for organ transplant operations. He and other researchers believe the massive population of imprisoned practitioners to be a primary source for organs used in transplants in China.

One of the two authors who published a groundbreaking report into organ harvesting was also on the Hill for the event: former MP and Secretary of State (Asia-Pacific) David Kilgour.

That report, “Bloody Harvest: The killing of Falun Gong for Their Organs,” found that 41,500 practitioners were killed for their organs in the years 2000 to 2005.

“Many of the Falun Gong prisoners of conscience—and I know that many of you have families or yourself have been victims of this—are unwilling organ ‘donors’ in the 350 or so forced labour camps across China,” said Kilgour.

‘The world will be a better place’

For many at the event, it was as much to support Falun Gong adherents’ struggle in the face of persecution as it was to support the practice’s central tenet.

“You can count on me for support in promoting the values of truthfulness, compassion, and tolerance that I know that you promote throughout the world,” said Conservative MP Stephen Woodworth, a founding member of the Parliamentary Friends of Falun Gong.

“Because when the world follows the Falun Dafa three key words—truth, compassion, and tolerance—the world will be a better place,” she said.

NDP MP Craig Scott, who, like Irwin Cotler, was an international human rights law professor before becoming an MP, said practitioners have impacted the world.

“I think it’s important for you all to know that apart from your main purpose being here and your main purpose in life to follow your spiritual beliefs, you all are engaged in a major effort to increase consciousness to another level.”

‘This should not be happening in today’s world’

Conservative MP Wladyslaw Lizon congratulated all of the followers of Falun Dafa in hundreds of countries around the world. But he particularly singled out the persecuted practitioners in China.

Conservative MP Joy Smith talked about how practitioners in China are constantly at risk of being arrested and becoming victims of organ harvesting.

“I am so proud that our country of Canada consistently calls on China to uphold international standards of human rights by ending the harvesting of organs from executed prisoners in China,” she added.

“Truth, compassion, and tolerance—what a lovely genre to put forth in front of people all over the world. So congratulations to the Falun Dafa practitioners all across Canada on the 23rd anniversary of the introduction of Falun Dafa to the public.”

NDP MP Hoang Mai talked about the importance of giving support, noting that he has tabled petition signatures gathered by practitioners.

“We, as members of Parliament and as Canadians, have to be there for people. We have to be there to help out. And that’s why as a Member of Parliament I was very proud to table the petition. I’m also very proud to tell you here today that the Official Opposition stands with you. We need to send a message to the Chinese government with respect to human rights, with respect to not targeting practitioners.”

“I join you to support you in your efforts to bring awareness to human rights issues in China. And as my colleague Mr. Cotler spoke about truth, compassion and tolerance, those are values that are very consistent with Canada, our government, and what we believe, and we’d like to see that spread across the world. And most importantly, to the human rights awareness in China and the freedom of Falun Dafa and Falun Gong practitioners.”

Conservative MP Brad Butt talked about how Canadian values include freedom of religion and freedom of assembly, and how practitioners uphold such values.

“So you send a very strong message to the world today about the importance of human dignity through your ability to practice your faith and your beliefs and Canada is a better stronger country because of Falun Dafa practitioners. So let’s carry on the important work that we need to do, standing up for these important values in China and around the world,” he said.

‘A quest for social justice’

Conservative MP Rob Anders said that he gets inspired when he sees Falun Dafa adherents on Parliament Hill. He talked about bringing about change and an end the imprisonment, beatings, arrests, torture, and organ harvesting that practitioners suffer in communist China.

Anders described how civil resistance movements around the world have changed the hearts of oppressive regimes such as Russia, the Philippines, Burma, and Czechoslovakia.

“They were all on a quest for social justice, as are you my friends, as are we,” he said.

He used the example of Taiwan as an alternative to the oppressive Chinese regime.

We’re still waiting for those people to face justice who have persecuted the Falun Gong and others.
— NDP MP Wayne Marston

“I think that it is a brittle regime that has oppressed so many, has killed so many million Chinese, has done more to corrupt the hearts and to destroy the moral fabric of China than anything else that has been subjected on China. I think that this will lead toward these benefits for the flowering of human rights and democracy inside China. Bless you for everything you do.”

Speaking in French, NDP MP Pauline Ayala mentioned the importance of basic freedoms. The following is a translation of part of her speech.

“I fought in my country, Chile, against a dictator, with non-violence activism, because I firmly believe in the liberty of expression, in the liberty of religion as well. So you can count on me in the sense that I will always do everything in my power so that people can express themselves, can have respect for their ideas in a climate of dialogue and one day you will succeed.”

There were also performances to celebrate traditional Chinese culture. Entertainment included a large group of waist drummers, children doing an ethnic dance from Shinjian province, and a group of young ladies doing a fan dance and a “watersleeves” dance.

Songs included “Celebrating Falun Dafa,” “Be Saved,” and “No Words Can Express Our Gratitude,” while a group of seven young girls demonstrated the basic techniques of traditional Chinese dance.