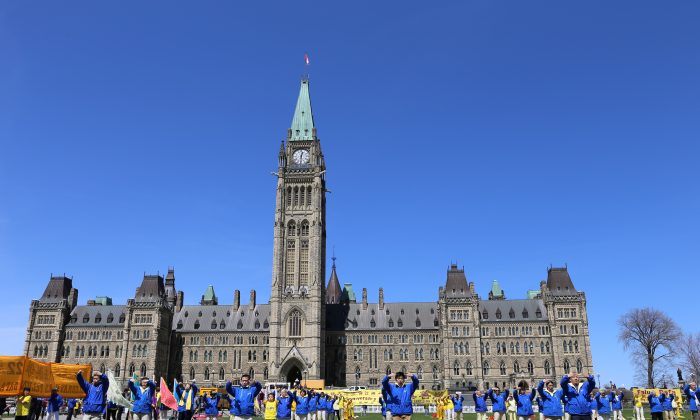 Falun Dafa practitioners from Montreal, Ottawa, and Toronto on Parliament Hill in Ottawa, Canada, to celebrate World Falun Dafa Day demonstrate the exercises that are a daily part of the practice, May 7, 2014. (Donna He/Epoch Times)
Canada

Around a dozen MPs of all stripes attended festivities on Parliament Hill Wednesday to celebrate the 22nd anniversary of Falun Dafa, also called Falun Gong. The spiritual discipline was introduced to the public on May 13, 1992, in northeastern China by Mr. Li Hongzhi, and has since spread around the world.

To mark the occasion, Prime Minister Stephen Harper, as well as several MPs, sent greeting letters to the Falun Dafa Association of Canada. In his letter, Harper relayed a message of support for FDAC’s efforts to stop the suppression and persecution of adherents by the Chinese regime, which began in July 1999.

“Last year, our government was pleased to launch Canada’s Office of Religious Freedom to encourage the protection of religious minorities around the world so that all can practice their faith without fear of violence or repression. The Falun Dafa Association of Canada is a valued partner in these efforts,” Harper wrote.

The Chinese regime outlawed Falun Dafa in 1999 and launched a campaign of persecution against the spiritual practice, which continues today. Tens of thousands of Falun Dafa practitioners are languishing in prisons across the country, where they are often tortured and/or brainwashed to give up the practice.

All the MPs spoke at the event on Parliament Hill, including Irwin Cotler, a longtime supporter of Falun Dafa. In 2001, when the Liberals were in power, Cotler worked to secure the release of Canadian citizen Professor Kunlun Zhang, who was imprisoned while on a visit to China because he is an adherent of the practice.

“That is what the Chinese authorities’ violation has been all about,” Cotler said in his speech.

At the end of last year, Cotler introduced a private member’s bill to crack down on those who trade in human organs, take part in organ harvesting, or get a transplant without making sure the organs were willingly donated.

He told Epoch Times in a previous interview that his bill was inspired by the work of human rights lawyer David Matas and former MP and Secretary of State for Asia-Pacific David Kilgour, whose extensive investigation of the killing of Falun Gong adherents for their organs in China sparked an international reaction.

In his speech on Wednesday, Kilgour urged Conservative MPs to adopt Cotler’s bill.

”It won’t solve the problem but it will at least stop Canadians from going over to China for organs,” he said.

Employment Minister Jason Kenney said he had “just received a copy of Irwin’s bill and I look forward to studying it with great interest. … We should never tolerate that kind of exploitation.”

“Never take for granted the freedoms we enjoy in Canada,” Kenney added. “We stand in solidarity with you.”

“We all must work together to advocate internationally to put pressure on the Chinese government to end this practice,” he said, adding that he encouraged practitioners in Canada to “keep up the good fight.”

“Your efforts are not lost on me, on fellow parliamentarians, on Canadians. Keep up the pressure to convince those who are responsible for this persecution that respect for human rights is not an option—it’s a necessity in the 21st century.”