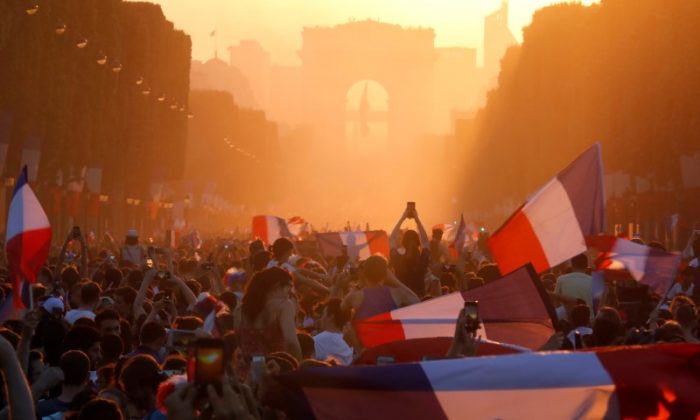 Fans in France celebrate on the Champs-Elysées after France's win at the soccer World Cup final. (Charles Platiau/Reuters)
Europe

French police clashed with revelers on July 15 as tens of thousands took to the streets in Paris to celebrate the country’s first World Cup win in 20 years.

While soccer fans basked in the joy in Paris, a small number of people caused violence in the city, marring the celebrations.

Police in Paris fired tear gas on July 15 as some revelers smashed windows, broke into shop fronts, and looted items. Footage posted on social media showed people flipping over cars. More than 100 were arrested in central Paris, according to local media.

The following day, some shopkeepers on the Champs-Elysées boarded up their shops in preparation for a potential repeat of the violence as hundreds of thousands of fans descended on the avenue.

A French journalist for Le Figaro posted on Twitter an image of the Nike store where police had to disperse a crowd on July 16, as some fans demanded the new French football jersey featuring two stars, symbolizing the number of World Cups the country has won. The store remained closed on July 16.

As the country celebrated, two people lost their lives in separate tragic accidents, according to reports. In the town of Annecy, a man in his 50s reportedly died after he jumped into a shallow canal and landed on his neck. Another man in his 30s reportedly crashed his car into a tree in the small town of Saint-Félix while celebrating the win.

But for many, the World Cup win was a joyous occasion, with fans enjoying a moment of national pride and unity, putting aside the threats of Islamic terror attacks and tense political elections.

Soccer fans woke up charged as the festivities continued into July 16, ready to salute the victorious team before they paraded down the Champs-Elysées in Paris.

The France coach Didier Deschamps was thrown into the air by his players on July 15 following a victory that made him only the third manager to win the World Cup as both a player and a coach.

The French government announced that the World Cup team will receive the country’s highest award, the Légion d’Honneur.

To celebrate the win, the Paris subway has renamed six of its stations—two after the team’s manager.

In a similar vein, Brussels renamed Arts-Loi to Hazarts-Loi, after Belgium player Eden Hazard, after Belgium won third place. In London, Southgate tube station, on the Piccadilly line, was rebranded in honor of the England manager, Gareth Southgate.

French President Emmanuel Macron watched the final with his wife, Brigitte, in Moscow, and appeared to be overcome by the victory, standing on the field in the pouring rain to hug each of the players at length and then kissing the World Cup trophy.

After 14 months as president, Macron’s poll ratings have fallen steadily, to about 40 percent.

The last time France won the World Cup, in 1998, then-President Jacques Chirac’s popularity soared, in what has been called the “World Cup effect.”

While a repeat of the boost that Chirac gained is unlikely, political pollsters say it’s not out of the question, at home and abroad.

“It’s far from a given that what happened in 1998 will be reproduced in the same way now,” said Gael Sliman, a pollster with Odoxa. “[But] one could very well see 5, 6, 10 points of popularity gains for the executive. It could also have a meaningful impact on French economic morale, people’s confidence in the future, their optimism in general, including when it comes to consumer behavior.”