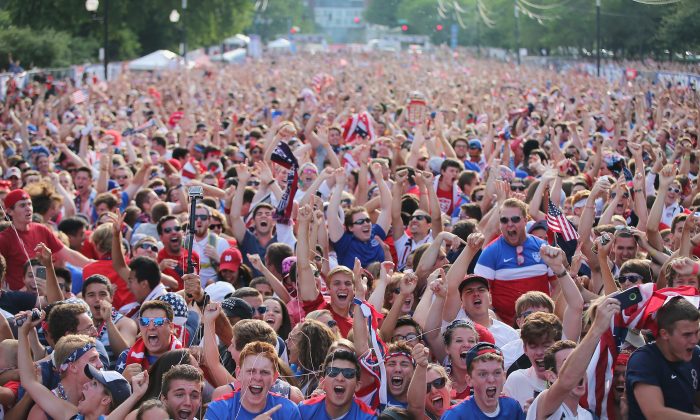 Fans in Grant Park celebrate a goal by the U.S. against Portugal in a Group G World Cup soccer match on June 22, 2014 in Chicago, Illinois. Fans were turned away from the free event after a 10,000-person capacity was reached. (Scott Olson/Getty Images)
Good to Know

USA will take on Belgium on Tuesday, July 1, and fans will be wondering where the viewing parties are at, and good locations to catch the game.

Check out where to catch the big game in New York City, Chicago, Washington D.C. and New Mexico.

Unfortunately, no viewing parties have been organized for this match.

Fortunately, there are plenty of sports bars in NYC where you can hang out with your buddies and watch the game.

Here are some locations recommended by Time Out.

There will be a screening event at Chicago’s Soldier Field for Tuesday’s match.

Previously, the viewing party was held at Grant Park, but was shifted because of the huge crowd, which was estimated to be about 20,000-strong.

MLS side D.C. United will co-host the viewing party along with developers Akridge.

The party starts at 3:00 p.m. EDT, an hour before the game, and the match will be broadcast on a 17-foot-tall screen.

The National Portrait Gallery and Smithsonian American Art Museum is also getting into the action.

The Smithsonian will co-host a free viewing party together with the Embassy of Belgium, the D.C. mayor’s office, and the Downtown D.C. Business Improvement District at Kogod Courtyard.

The museums are located at 8th and F streets in Washington, and the match will air at 4:00 p.m. EDT. Fans are invited to dress up in support of their team.

The city of Albuquerque is having a viewing party.

Mayor Richard Berry’s office announced that a city-sponsored watch party will be held Tuesday afternoon at the KiMo Theatre in downtown Albuquerque.

The party starts at 1:00 p.m. MDT, an hour before the game, which will be broadcast on the KiMo’s new, state of the art silver screen.

The party is free and a light concession stand will be open.