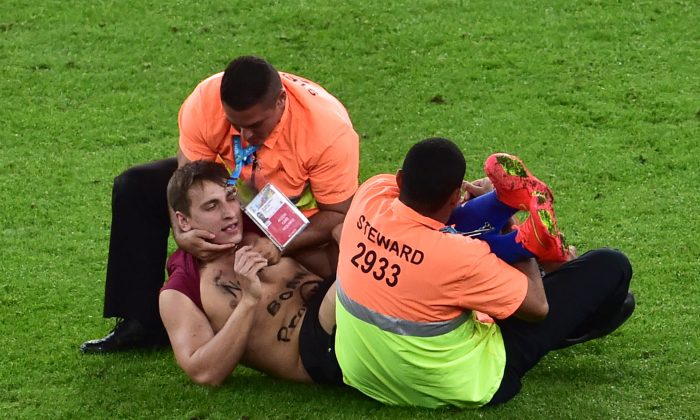 Security officials detain a pitch invader during the final football match between Germany and Argentina for the FIFA World Cup at The Maracana Stadium in Rio de Janeiro on July 13, 2014. (NELSON ALMEIDA/AFP/Getty Images)
Soccer

There was a streaker at the Germany vs Argentina game.

The streaker, who had written the words “Natural Born Prankster” written on his chest, was identified as one Vitaly Zdorovetskiy, a Russian comedian.

NBA star LeBron James managed to take a video of the incident, which he uploaded to Instagram.

At one point, even tried to plant a kiss on German player Benedikt Howedes.

Check out some pictures below.

BERLIN (AP) — It’s been a long wait, and now Germany is basking in its fourth World Cup title.

The Die Welt newspaper celebrated Monday with a three-word headline in the national colors of black, red and gold that read simply: “It is true,” while Der Spiegel magazine’s website listed Germany’s titles: “1954. 1974. 1990. 2014!”

German astronaut Alexander Gerst congratulated the team from the International Space Station on its “top performance.” He tweeted a picture of himself in a Germany jersey with an extra fourth star — “as experts on stars, we already got one.”

Germany goalkeeper Manuel Neuer said after the match: “All of Germany is the world champion.”

The theme was picked up by a top official in Chancellor Angela Merkel’s party, Peter Tauber, who tweeted, “Good morning, you world champions out there!”

Merkel and President Joachim Gauck, who traveled together to the final in Rio de Janeiro, posed for pictures with the team and the trophy. And there was another selfie with a beaming chancellor for forward Lukas Podolski, weeks after Merkel dropped into the dressing room during a visit to Germany’s opening match.

About a quarter of a million fans celebrated into the night at the packed “fan mile” in front of Berlin’s Brandenburg Gate, while car drivers blasted their horns into the early hours of the morning.

The party resumes on Tuesday morning, when coach Joachim Loew’s team is due to land at Berlin’s Tegel airport and then celebrate its triumph at the Brandenburg Gate.

The Finance Ministry said it will issue a special “Germany World Cup champion” postage stamp. But don’t expect Germany to declare a national holiday in celebration.

“There is no serious discussion of this,” government spokeswoman Christiane Wirtz said.