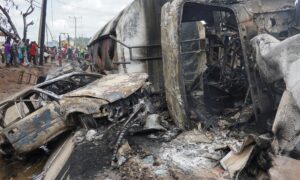 South African opera singer Siphiwo Ntshebe, 34, who was chosen by Nelson Mandela to sing at the opening ceremony of the World Cup in South Africa next month suddenly died of the meningitis on Wednesday.

The 34-year-old singer was trained at London's Royal College and performed throughout Europe with a repertoire including operas from Mozart, Strauss, and Puccini.

His musical career started as early as the age of 5, when he would sit on his father's knee to sing to guests visiting his parent's home. He was admitted to hospital last week after he was struck down by the illness while rehearsing.

He was slated too perform his anthem, 'Hope,' with a full orchestra at the opening ceremony in Johannesburg on June 11. Mandela himself speaks on the track saying, "The generosity of the human spirit can overcome all adversity. Through compassion and caring we can create hope. We can create hope."