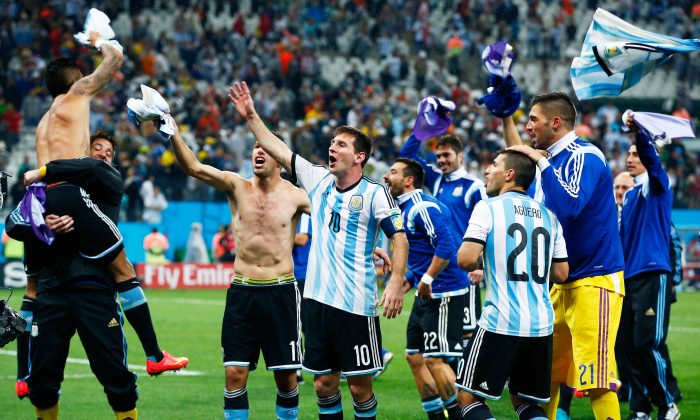 Messi gets his shot at football immortality
By Rahul Vaidyanath

Argentina and Germany, two nations with tremendous football pedigrees, reached the 2014 World Cup final after semifinal victories that couldn’t be any more different.

The final match will be played Sunday, July 13 in Rio de Janeiro at the famed Maracana with its capacity of just under 75,000.

It’s remarkably the eighth World Cup final for Germany (six as West Germany) and fifth for Argentina. The Germans have won it three times while the Argentines have won it twice.

On Wednesday, the South Americans needed a penalty shootout to eliminate Netherlands after an entirely forgettable 120 minutes of tedious football. A day earlier, the Germans put up a result that will never be forgotten—a 7–1 demolition of host nation Brazil.

Lionel Messi has done it all in club football with Barcelona and he is considered by many to be the best footballer on the planet and one of the greatest of all time alongside the likes of Pelé and Maradona.

What’s missing for Messi is a World Cup win, and should he get it, one could reasonably consider him the greatest footballer in history.

Messi carried Argentina on his back in the group stage, with four goals. He set up Angel Di Maria for the winner against Switzerland in the Round of 16.

For Argentina, Messi’s play and a perhaps uncharacteristically stiff defense has been the recipe for success. Like their opponents Germany, that defensive stability comes from tenacious holding midfielders and talented central defenders.

Goalkeeper Sergio Romero has made some terrific saves when he’s had to but because of the quality of his defense, he isn’t necessarily mentioned as having put up some of the most memorable performances of this World Cup like U.S.’s Tim Howard or Mexico’s Guillermo Ochoa. But Romero was brilliant in the penalty shootout—most notably for his save on Wesley Sneijder.

Argentina’s matchup against the Dutch should prepare them well for Germany. The Dutch are a side formidable in attack, although they adopted a cautious approach to the semifinal. While Argentina limited the damage from Arjen Robben and Sneijder, the Germans bring a more balanced attack.

A key question mark is the health of winger Di Maria. The Real Madrid star didn’t feature against Netherlands in the semifinal due to a leg injury. If he is healthy, his ability to run at the German defense could be the key, as the Germans are not known for their speed at the back.

And because of Netherland’s defense-first approach and a lack of Di Maria, Argentina’s also created few chances; Messi was also closely monitored.

Argentina’s wins, aside from the semifinal, have all been by one-goal margins. It’s probably a good bet that the final will also be decided by one goal.

So what can we take away from Germany’s 7–1 semifinal destruction of Brazil in Belo Horizonte on Tuesday?

Germany is ruthlessly efficient at punishing mistakes. The Germans truly are a team—more like a well-oiled machine with all parts working cohesively together. They are unflappable and showed singular focus as they calmly dealt with the hostile Brazilian crowd to start the match. And they don’t make mistakes.

Brazil was never in a position to succeed against Germany without Neymar and Thiago Silva; one can only speculate about their mental fragility as well.

The match was over before the half-hour mark. Not facing any adversity in a semifinal is unusual, but Germany has dealt with challenges in earlier stages.

They ground out one-goal victories over a stubborn Algeria and dangerous France after topping arguably the toughest of eight group.

Germany is very solid down the middle with holding midfielders Sami Khedira and Bastian Schweinsteiger sitting in front of Jerome Boateng and Mats Hummels in central defense. Captain Philipp Lahm, at times, has also filled a more central role.

Where Germany showed some vulnerability on defense is against Ghana where the speedy Ghanaians were able to attack on the wings and put two goals past Joachim Low’s men.

But Manuel Neuer is well on his way to achieving Oliver Kahn status as one of Germany’s great goalkeepers. Neuer showed he is capable of being like a sweeper at the back when needed.

The German attack is lethal. Thomas Müller has a shot at a second straight golden boot award if he can score one more goal in the final. Nobody has ever won the World Cup golden boot twice.

The old man Miroslav Klose, 36, who now holds the record with 16 World Cup goals is an aerial threat and “fox-in-the-box” goal poacher.

Attacking midfielder Toni Kroos has been the dominant force through the midfield while Mesut Ozil has been less noticeable, but should he spark to life, Germany’s midfield would be unmatched.

The challenge for Kroos and Ozil will be to get rid of the shackles of Javier Mascherano who was excellent in stopping Robben.

Expect Germany to offer far more in attack than the Dutch did, but that will also leave more room for Messi. Argentina need to exploit the wings and stretch the Germans.

The World Cup final is upon us with two deserving finalists vying for history. It is a finely balanced matchup that has everything a game of this magnitude should have going for it.