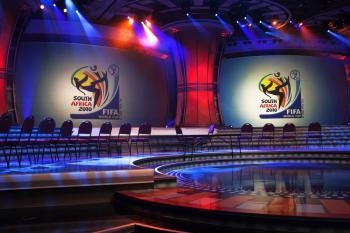 The stage is set at the Cape Town International Convention Center in Cape Town, South Africa for the draw of the groups, which will take place this Friday, Dec. 4. (Gianluigi Guercia/AFP/Getty Images)
Soccer

Rahul Vaidyanath
Journalist
Rahul Vaidyanath is a journalist with The Epoch Times in Ottawa. His areas of expertise include the economy, financial markets, China, and national defence and security. He has worked for the Bank of Canada, Canada Mortgage and Housing Corp., and investment banks in Toronto, New York, and Los Angeles.
View profile
Follow
biggersmaller
Print
FIFA announced on Wednesday the procedure for Friday’s Final Draw for the 2010 World Cup in South Africa. The world’s governing soccer body determined how the 32 teams would be initially grouped into four pots of eight teams prior to the highly anticipated draw.

As if to show proof there is some justice in this world, France will not be one of the seeded teams at next summer’s World Cup in South Africa. You will recall that France qualified for the World Cup last month controversially after Thierry Henry’s hand ball helped set up the decisive goal against Ireland.

By determining that the seeded teams would be chosen based on their October world ranking, Pot 1 consists of (in order of ranking): Brazil, Spain, Netherlands, Italy, Germany, Argentina, and England. Pot 1 also includes the host nation, South Africa (ranked 85).

France was ranked ninth as of October. As a result, France will have to face one of the Pot 1 teams in the round robin stage. In the November ranking, France moved up two places to seventh.

Pot 2 will consist of teams from Asia, North and Central America and the Caribbean, and Oceania. These eight teams are: Australia, Japan, South Korea, North Korea, Honduras, Mexico, USA, and New Zealand.

As the host nation, South Africa will automatically be placed as the first team in Group A. The remaining seven Pot 1 teams will be drawn into the first position for Groups B–H.

With the 13 European teams taking part in the World Cup, FIFA will ensure that no more than two European teams can be drawn into one group. And South Africa cannot be drawn against another African nation.

The Final Draw inevitably will produce a “group of death.” One such group (based on FIFA’s most recent November rankings) could be Spain (ranked No. 1), USA (ranked No. 14), Cameroon (ranked No. 11), and, of course, France (ranked No. 7).

Stay tuned for Friday’s excitement from Cape Town, South Africa, where the draw will take place. Some of the stars on hand to take part in the ceremony include South African actress Charlize Theron and David Beckham.