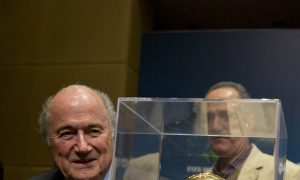 FIFA World Cup 2014: How Much Is Your Country Worth?
0
Share Now
TelegramFacebookTweetEmailTellMeWeReddit
Copy Link 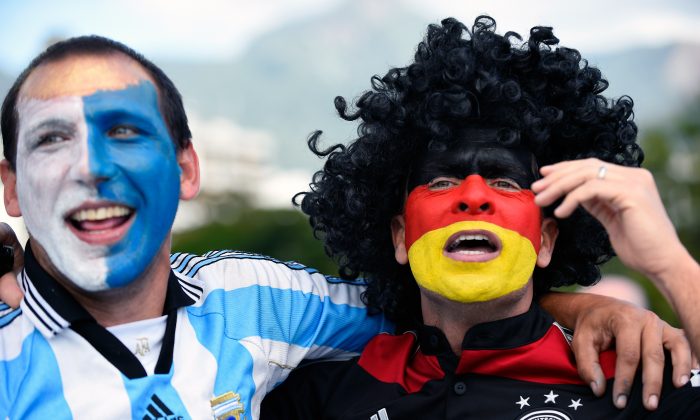 Argentina and Germany fans cheer prior to the 2014 FIFA World Cup final football match between Germany and Argentina at the Maracana Stadium in Rio de Janeiro, Brazil on July 13, 2014. (Pedro Ugarte/AFP/Getty Images)
Soccer

A billion people across the globe will tune in to today’s World Cup Final between Germany and Argentina, according to Daily Record.

The FIFA World Cup really is the ‘Super Bowl of the world’, and in suitable fashion, here is the celebrity red carpet for the event(celebrities who will be showing to the live match).

The Lionel Messi of the basketball world has made his groundbreaking decision to rejoin the Cleveland Cavaliers, and will be escaping the buzz by flying to Brazil to see the World Cup Final live.

Even Lebron admitted the World Cup is much bigger than the NBA, according to a report by Yahoo Sports.

Rhi-Rhi stirred up controversy a few weeks ago when she refused to, and even persisted in rooting against team USA.

Well lucky for her, USA is not playing in the World Cup Final.

Rihanna has officially made her arrival in Brazil, and even met with Brazil soccer legend Pele.

No, the former English soccer superstar no longer plays anymore, but he will gracing the event with his presence and expertise.

According to Beckham, Argentina will beat Germany 3-1.

And apparently, this guy is being blamed for Brazil’s World Cup loss because he’s a soccer jinx?

The Brazilian supermodel has been name a big name celebrity of the event since it began.

However contrary to previous reports, she will not be presenting the trophy to the winning team, according to Associated Press.

Instead, she will assist in carrying the trophy onto the pitch before the match.