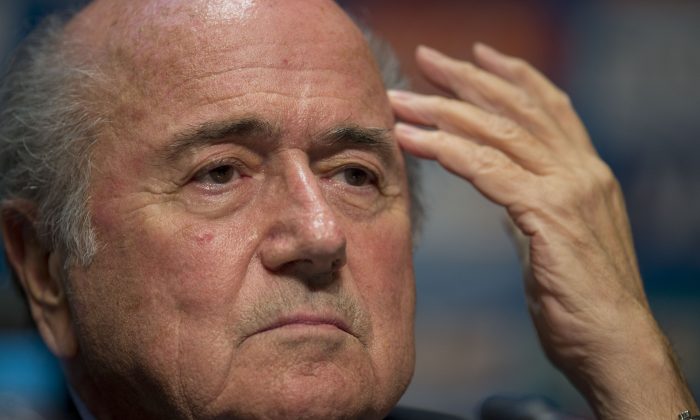 FIFA President Sepp Blatter looks on during a press conference where he talked about the organization and infrastructure of the upcoming World Cup, in Sao Paulo, Brazil, Thursday, June 5, 2014. The World Cup soccer tournament starts on 12 June. (AP Photo/Andre Penner)
Soccer

The USA will not be hosting World Cup 2022, at least for now.

FIFA president Sepp Blatter admitted shortly after Qatar was picked that it was a “mistake” to host the World Cup in Qatar given the region’s unforgiving summer temperature.

“Yes, it was a mistake of course, but one makes lots of mistakes in life,” said Blatter in an interview with the Swiss broadcaster RTS.

“The technical report into Qatar said clearly it was too hot but the executive committee – with a large majority – decided all the same to play it in Qatar.”

Blatter has since proposed holding the World Cup in the winter, and has turned down a revote taking place, although there might be one if investigations into the 2018 and 2022 World Cup bidding process turns up anything.

While there was a call for a revote, the USA was one country that was thrown up as a possibly replacement for Qatar.

USA was originally turned rejected by FIFA because the world football governing body cited an absence of “guarantees of federal government support” as the main reason why the World Cup should not be awarded to the States.

In the event of a revote, however, the enthusiastic support of the US Men’s National Soccer team from both the executive (Obama tweeted out his congratulations to the USMNST for their “great World Cup run”) and the population at large (more than 26 million in the US watched the Germany/Argentina final) should be convincing enough for FIFA to give the United States another shot at hosting the soccer global showpiece.