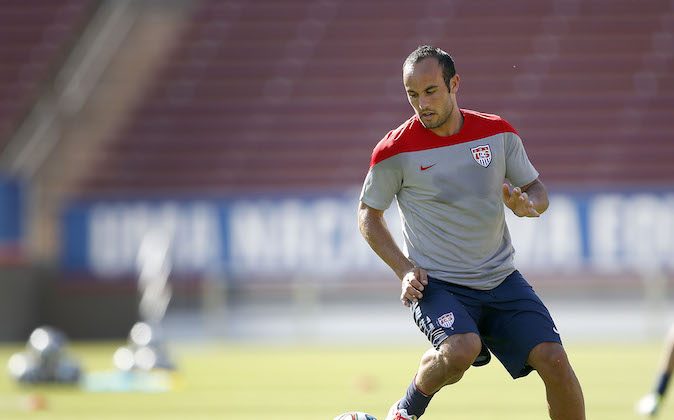 United States' Landon Donovan, controls the ball during a training session on Wednesday, May 14, 2014, Stanford, Calif. The US national soccer team kicked off its preparation camp at Stanford University preparing for the World Cup tournament, which gets underway in June. (AP Photo/Tony Avelar)
Soccer

STANFORD, Calif.— Landon Donovan, the most accomplished American player in the history of men’s soccer, won’t be going to his fourth World Cup.

The 32-year-old attacker, who set the national team record for goals and assists while winning five titles in Major League Soccer, was among seven players cut Thursday when coach Jurgen Klinsmann got down to the 23-man limit well before the June 2 deadline.

“I was looking forward to playing in Brazil and, as you can imagine, I am very disappointed with today’s decision,” Donovan said in a statement posted on Facebook. “Regardless, I will be cheering on my friends and teammates this summer, and I remain committed to helping grow soccer in the U.S. in the years to come.”

Beasley and Donovan were teammates on the U.S. team that finished fourth in the 1999 FIFA Under-17 World Championship.

“Landon is my brother. I’ve known Landon since I was 15. We’ve been through a lot together,” Beasley said. “To not have him there is difficult.”

Klinsmann had announced a preliminary 30-man roster May 12, and training began two days later at Stanford University’s football and soccer stadiums. When they arrived for Thursday’s practice, players had no idea this would be cutdown day.

Having already watched his team in scrimmages against Stanford last Saturday and the L.A. Galaxy II three days later, Klinsmann felt the impetus to make decisions well before upcoming exhibitions against Azerbaijan, Turkey and Nigeria.

“We discussed it every day, when is a good time and how we felt since we go into another scrimmage tomorrow morning,” he said in a golf cart outside the locker room, looking ahead to a practice session Saturday against the San Jose Earthquakes’ reserves.

He put off discussing the Donovan decision until a Friday news conference. Asked whether he agonized over it, he said “a little bit of time.”

The U.S. Soccer Federation quoted Klinsmann as saying “this is certainly one of the toughest decisions in my coaching career, to tell a player like him, with everything he has done and what he represents, to tell him that he’s not part of that 23 right now.”

“I just see some other players slightly ahead of him,” Klinsmann said, “He took it the best way possible. His disappointment is huge, which I totally understand. He took it very professionally. He knows I have the highest respect for him, but I have to make the decisions as of today for this group going to Brazil.”

Donovan, the American record holder with 57 international goals and second with 156 appearances, was gone by the time the roster was announced. Players who survived the cut met in the Stanford football locker room for a meeting that ended with applause, went in golf carts to a nearby sand volleyball court and had fun playing a kick version of volleyball. They returned to the football locker room for the gear, and as they left the Stanford band gathered outside and serenaded them with “Star Wars.”

Klinsmann’s son, Jonathan, a goalkeeper who was with the U.S. under-18 team last month, created a stir when he tweeted: “HAHAHAHAHAHAH DONOVAN HAHAHAHAA I DIDNT EVEN NOTICE UNTIL MY PHONE NOTIFIED ME” followed by four emoticons with tears and another “HAHA.” The account was quickly deleted.

Donovan, scoreless in seven games this season with the Los Angeles Galaxy, was bypassed in favor of 23-year-old Aron Johannsson and 31-year-old Chris Wondolowski, who joined Jozy Altidore and Clint Dempsey as the forwards.

Klinsmann also took 18-year-old midfielder Julian Green, who was eligible to play for the U.S. and Germany and only made his national team debut last month.

Eric Wynalda, a forward for the U.S. at the 1990, 1994 and 1998 World Cups, said Klinsmann’s decision will be compared with coach Steve Sampson announcing two months before the 1998 tournament that he was dropping captain John Harkes.

“That was an incredibly disruptive decision that really destroyed our team. A lot of people are going to make that correlation, and I don’t think they should because it’s a different scenario,” said Wynalda, now an analyst for Fox. “The implications of leaving Landon out of this team could strengthen the side. Where we’ve relied so much on him in the past, this forces other people to really feel the belief from their manager. As horrible as this must be for Landon, and as agonizing as it is for Jurgen, these are the tough decisions you pay Jurgen Klinsmann a lot of money to make.”

“Mine was a disciplinary issue. His I’m sure is based purely or form,” Sampson said. “I was surprised at the decision. I would have not have been surprised if Landon didn’t start. I still believe him coming off the bench would have been a good option for Jurgen during the World Cup.”

Donovan was a mainstay of the national team before he took a sabbatical of about four months after the 2012 season, spending part of the time in Cambodia. Klinsmann said Donovan would have to earn his spot back.

He restored Donovan to the roster for last summer’s CONCACAF Gold Cup, where Donovan excelled, and played Donovan for World Cup qualifiers later in the year. But Klinsmann kept him out of the starting lineup for last month’s exhibition against Mexico, saying Donovan practiced poorly because of a knee problem.

Donovan said this week his knee was OK.

“I’m very confident in my abilities and I think I’m deserving to be a part of the squad, but I have to prove that and I have to earn it,” he said Monday.

The roster includes 10 players from MLS, up from four in 2010, and just five players who have appeared in a previous World Cup — the fewest since the American returned to soccer’s showcase in 1990 after a 40-year absence.

Five of the players are German-Americans who chose the U.S. over the nation they grew up in: defender John Brooks, Timmy Chandler and Fabian Johnson, joined by Green and Jermaine Jones in the midfield. Chandler has not played for the national team since his competitive debut in February 2013.

Goodson and Parkhurst were among the MLS players cut.

“Gutted,” Parkhurst tweeted. “At peace tho knowing i did everything i could and made it a tough decision for coaches.”