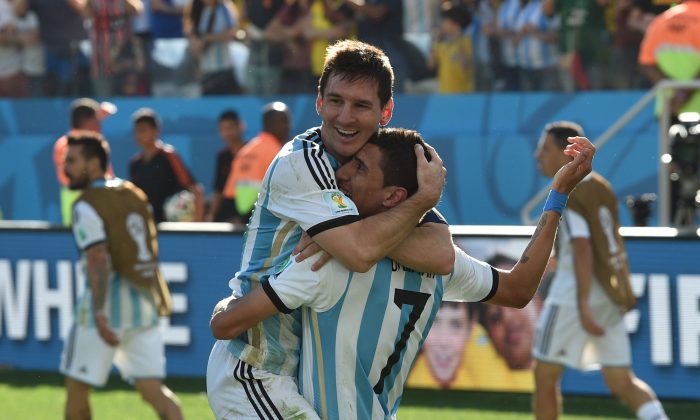 Argentina's forward and captain Lionel Messi (L) and Argentina's midfielder Angel Di Maria celebrate after scoring the 1-0 during a Round of 16 football match between Argentina and Switzerland at Corinthians Arena in Sao Paulo during the 2014 FIFA World Cup on July 1, 2014. (NELSON ALMEIDA/AFP/Getty Images)
Soccer

World Cup 2014 Bracket and Scores: Update on Second Round Standings, Results in All Round of 16 Matches

The World Cup 2014 second round matches are completed.

Sixteen teams qualified for the second stage of the global tournament.

Check out the draw, fixtures and results for the round of 16 below. All times are in Eastern Daylight Time (EDT).

1A. Brazil  vs. 2B. Chile at Estádio Mineirão, Belo Horizonte

1B. Netherlands vs. 2A. Mexico at Estádio Castelão, Fortaleza

Here is the updated bracket and standings. All times are in Eastern Daylight Time.

See an Associated Press roundup of the final day of group stage matches.

US and Algeria in, Suarez out of World Cup

RIO DE JANEIRO (AP) — As Luis Suarez prepared to leave the World Cup in disgrace, Americans and Algerians were celebrating their places in the knockout rounds on a dramatic final day of the group stage on Thursday.

While some form of suspension for Suarez was guaranteed after the Uruguay striker bit Italy’s Giorgio Chiellini on the shoulder, few would have predicted one of the longest bans in the tournament’s history — nine international matches and four months from all football.

It was his third ban for biting after previous incidents in England and the Netherlands, and given the comments made by FIFA, it’s hard to see the Uruguayan football federation making much headway with its appeal.

“Such behavior cannot be tolerated on any football pitch and in particular not at a FIFA World Cup, when the eyes of millions of people are on the stars on the field,” Claudio Sulser, chairman of the FIFA disciplinary committee, said in a statement.

While he may no longer be in Brazil, his peers in Neymar of Brazil and Argentina’s Lionel Messi are still very much in the tournament — as are the United States and Algeria, which has finally reached the last 16 for the first time in its history.

The U.S. lost 1-0 to Germany on Thursday in its last match in Group G, but it still managed to qualify and line up a second-round game against Belgium on Tuesday in Salvador.

Ghana, which had a more realistic chance of beating the U.S. to second place behind the already-qualified German, missed its chance in a 2-1 defeat to Cristiano Ronaldo’s Portugal. Ronaldo scored the winner in a pyrrhic victory for what the world player of the year has accurately described as “probably just an average team.”

He now joins England’s Wayne Rooney and Italy’s Mario Balotelli as the star also-rans in a tournament that has sprung plenty of surprises.

Germany will play Algeria in Porto Alegre on Monday, a match that comes with some emotional baggage.

At the 1982 World Cup, Germany denied Algeria a place in the second round by playing out an infamous match with Austria that finished 1-0 to the Germans. The result, achieved by just knocking the ball around after the goal had been scored, qualified the European neighbors and sent the Algerians home.

Thursday’s 1-1 draw with Russia has not only helped Algeria turn the page on one of the tournament’s darkest moments, it has also offered a chance to rip the page out completely with an unlikely revenge victory on Monday.

The end of the group stage has, meanwhile, underlined just how well the tournament has gone for teams from the Americas — which have filled half of the last 16 slots — and how big the disappointment has been for Europe and Asia.

For a second World Cup running, only six European teams have advanced — Netherlands, Germany, France, Switzerland, Belgium and Greece — the joint-lowest figure since this format was introduced in 1986.

Africa has two representatives, Algeria and Nigeria, while a debacle for Asia has seen all four teams fall at the first hurdle.

After a rest day on Friday, the action restarts on Saturday with two matches — when host Brazil takes on Chile in Belo Horizonte and Colombia faces Uruguay in Rio. Neymar will be at the heart of the action in the Belo Horizonte, while Suarez will only be a spectator.