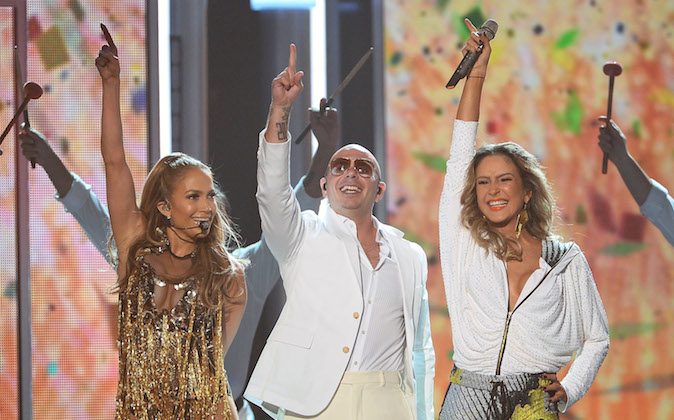 World Cup 2014 is finally here, and it all begins with the opening ceremony on Thursday, June 12.

The ceremony will be broadcast on ESPN3 in the United States, CBC in Canada, and ITV in the United Kingdom. See a full list of World Cup broadcasters here.

Live stream is available on Watch ESPN and ITV Player for subscribers.

The ceremony will feature a range of song and dance, and should last for 25 minutes.

“The Opening Ceremony is a tribute to Brazil and its treasures: nature, people football,” the show’s Belgian artistic director Daphne Cornez said in a statement.

“The sense of excitement here is amazing and everyone is very motivated. It doesn’t matter whether they’re feeling tired or hot sometimes or if they have to go through routines again and again: they just keep on smiling. It’s amazing.”

Pitbull, Jennifer Lopez, and Brazilian artist Claudia Leitte will be performing the official song, “We Are One (Ole Ola).” The song has over 75 million views online.

J.Lo was originally scheduled to perform, then said she wouldn’t be able to make it. Now she says she’ll be there after all.

NEW YORK—Not so fast: J.Lo is performing at the World Cup after all.

Jennifer Lopez said in an interview that she is flying to Brazil to perform during the tournament’s opening ceremony on Thursday.

“I’m coming. I leave tonight. We always were going,” she said earlier this week. “I think people get anxious, especially with me and my schedule when I’m like, ‘Ah, OK, I can leave this day, that day, I don’t know if we can make it.'”

“People get nervous and I think it was a little bit premature to announce anything,” she said. “But we are definitely going.”

FIFA officials announced earlier this week that the singer wouldn’t perform the official tune “We Are One (Ole Ola)” alongside Pitbull and Claudia Leitte. But Lopez said they will perform before Brazil takes on Croatia at Thursday’s opening game in Sao Paulo.

Lopez said the World Cup song was orchestrated by Pitbull, who invited her to join on the track.

“I can’t take credit for this. This was one of Pitbull’s call-ins,” said Lopez, who has collaborated with the rapper on the hits “On the Floor” and “Dance Again.”

Lopez added: “I’m so lucky that he gave me the opportunity.”

The 44-year-old singer, who’s from the Bronx, is also busy promoting her new album, “A.K.A.,” to be released next week.