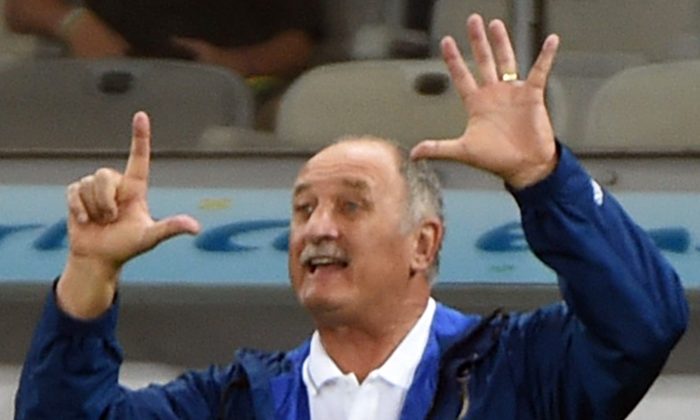 Brazil's coach Luiz Felipe Scolari gestures during the semi-final football match between Brazil and Germany at The Mineirao Stadium in Belo Horizonte on July 8, 2014, during the 2014 FIFA World Cup . (PEDRO UGARTE/AFP/Getty Images)
Good to Know

Germany rout Brazil 7-1 in the semi final of World Cup 2014, but what are the biggest World Cup scores and football in general?

The record for the most goals scored in a World Cup match occurred in the match between Hungary and El Salvador in 1982. The match ended 10-1 to Hungary.

The most recent blowout happened in the 2002 World Cup, where Germany beat Saudi Arabia 8-0.

Here are some of the highest scoring World Cup matches:

The most goals scored in a World Cup qualifying match goes to Australia and American Samoa on April 11, 2001. The matched finished 31-0 to Australia.

The biggest soccer blowout in history goes to AS Adema and SO l’Emyrne on October 31,  2002. The match ended 149–0 to AS Adema. All goals in the match were own goals, as the players wanted to protest what they presumed was bias refereeing.