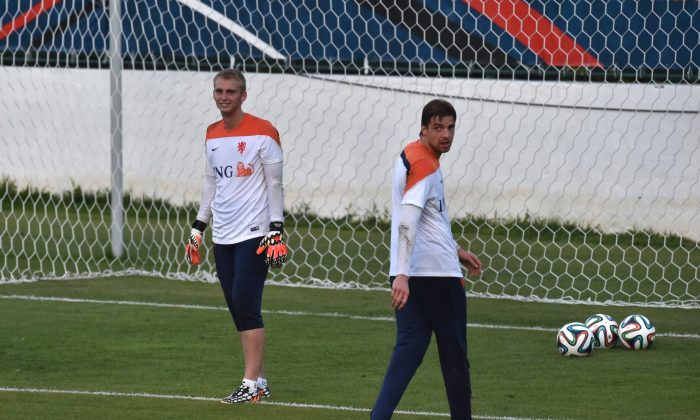 World Cup 2014: Jasper Cillessen Will Play Against Argentina; Tim Krul Swop Was All Part of the Plan

Jasper Cillessen is still Netherlands’ no. 1 goalkeeper despite being replaced before a penalty shootout.

Although Tim Krul replaced Cillessen in the World Cup 2014 quarter final penalty shootout against Costa Rica, it was a thought-out, tactical move.

In fact, Cillessen didn’t even know he was going to be replaced by Krul.

Netherlands coach Louis van Gaal said, “We said nothing to Jasper because we didn’t want him to know before the game.”

“But as I’ve explained, every keeper has specific qualities.

“Tim has a longer reach and a better track record with penalties than Cillessen.

“We had discussed it with Tim. He knew about their penalties because he needed to be prepared.

“If it hadn’t, it would have been my mistake.

“Every player has certain skills and qualities and they don’t always coincide. We felt Tim would be the most appropriate keeper to save penalties.

“You have seen that Tim dived to the right corner twice. We are a tiny bit proud this trick has helped us through,” van Gaal concluded.

Cillessen will go back between the sticks against Argentina.