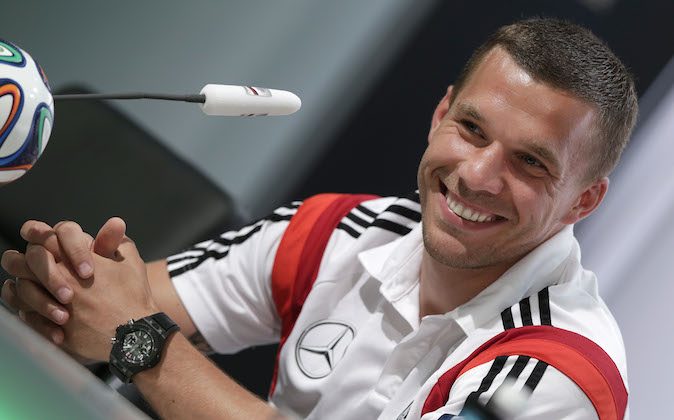 Lukas Podolski has backed under-fire attacking midfielder Mesut Ozil to show up against Portugal on Monday.

Ozil moved from Real Madrid to Arsenal in the 2013 summer transfer window for a record fee of £42.5 million ($72.2 million), but has yet to produce his stellar Real Madrid form at the Emirates Stadium.

Worse, Ozil spent a good part of the season out injured.

Fellow Arsenal and Germany team-mate Lukas Podolski has backed Ozil to show up at the World Cup, however.

“Mesut is a world-class player,’ Podolski said in a press conference. ‘Mesut has the quality and he’s going to give us a lot of pleasure.”

“He is going to produce the goods in the months and years to come and people have just got to accept him the way he is.”

Podolski also has no doubts about what he’s at Brazil to do.

“I am here to lift the World Cup title,” the Arsenal forward said.

“The 10 years have flown by and it would be great to complete the circle with the World Cup.”

Podolski, who has 114 caps and has scored 47 goals, said the German team had evolved over the past 10 years into a side that plays some of the most entertaining football in the world.

“We’ve developed, now we can really speak about the World Cup title,” he said. “The World Cup is always something special and I hope we can go far.”