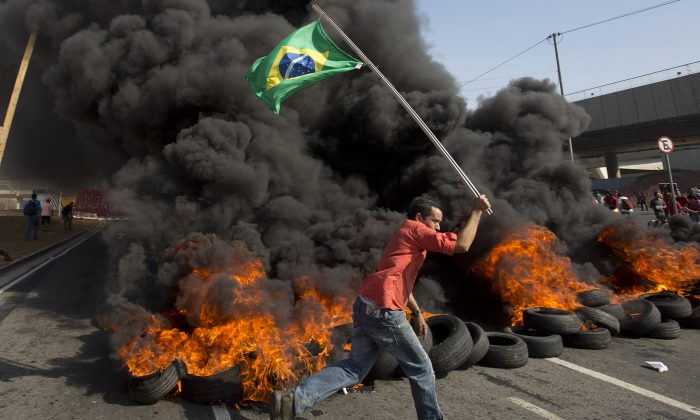 A member of the Homeless Workers Movement carries a Brazilian flag past burning tires during a protest against the money spent on the World Cup near Itaquerao stadium which will host the international soccer tournament's first match in Sao Paulo, Brazil, Thursday, May 15, 2014. Brazilians are angry at the billions spent to host the World Cup, much of it on 12 ornate football stadiums, one-third of which critics say will see little use after the big event. (AP Photo/Andre Penner)
Americas

With less than a month to go before the FIFA World Cup, Brazil has once again been shaken by strikes, protests, police repression, and promises of federal intervention to ensure public safety.

Just like the massive demonstrations of June and July 2013, the discontent these latest demonstrations express cannot be easily summarised – neither in terms of political intention nor ideological values.

As the presidential election of October 2014 approaches, various segments of Brazilian society are voicing different kinds of dissatisfaction. Among the protesters, there are teachers campaigning for better salaries, organised movements of the homeless fighting for their rights, and anti-World Cup groups protesting against the waste of public money in the construction of multi-billion-dollar football arenas.

This widespread sense of discontent springs from the persistence of dire economic inequality, police brutality (including murders, disappearances, and torture), rising pressure on incomes from inflation, and the government’s failure to improve Brazil’s health and education systems.

The traditional political parties, both left and right, were shaken by the 2013 protests’ spontaneity, the depth of mistrust in institutional politics, and the protesters’ tactics, which defied the norms of political organisation.

The fact is that the protests have not forced a clear political response from the Brazilian government. But they have provoked unexpected reactions from the poorest members of Brazilian society, who live in slums or in peripheral and degraded urban areas.

Many underprivileged communities, especially those in the favelas of Rio de Janeiro, have mounted constant demonstrations in the past few months, demanding fair treatment from the police and more attention from the government.

Human rights violations and indiscriminate violence are nothing new for the residents of these areas, yet their reaction to recent incidents has been more vocal and public than ever. While the 2013 demonstrations didn’t have a specific focus or earn any specific concessions from the state, they did give voice to a population that has so far seen its demands disregarded.

The protests have also had unexpected consequences in the Brazilian Congress. The violence of some protesters was identified by the mass media and mainstream politicians as mere vandalism. This reinforced the idea that the “correct” way of protesting is to do so in peaceful and organised marches, as opposed to “undemocratic” ways of demonstrating discontent with violence.

Based on that, much of the population began to support a harsher punishment for such acts. This support was echoed in the Brazilian Congress, and a new proposition of a law against “terrorism” was presented in July 2013.

Despite being condemned by the national constitution, the use of “tools of terror” is not proscribed in Brazilian law, and the country has no anti-terrorism legislation currently in force. The legal definition of “terrorism” is a highly sensitive subject in Brazil, since the concept was so abused in the “dirty war” waged by the country’s military rulers against political opposition during the dictatorship of 1964-1985.

That “war” was legally supported by the National Security Act of 1969; the same law quoted by some supporters of a new anti-terrorism act. Despite of the international centrality of this theme since 9/11, the debate in Brazil had been stuffy – until the demonstrations began last year.

To deal with them, various government spheres resorted to the National Security Act, invoking as a justification the urgency of preparing the Brazilian state to face possible public safety problems during major events, such as the World Cup and Olympic Games in 2016.

The term “terrorism” is highly open to interpretation, and it is telling that it could unify a large number of distinct groups, among them social organisations. It is not lost on them that a new anti-terrorism law could rehash the old practice of selective repression justified by labelling specific social groups “internal enemies”.

This chimes all too well with the rhetoric of the “war on terror”, with its post-9/11 suspensions of basic human rights and “exceptions” to international law. In the case of the World Cup, it is expected that the police forces will use all means necessary to stop large protests from happening, probably with the support of the armed forces.

That prospect was reinforced on May 15 2014, when dozens of demonstrations took place in Brazil’s major cities. While there was again no single cause at the root of the protests, the federal government and Rousseff herself were the main targets.

Rousseff has stated that she expects Brazilians to show visiting fans the happiness and hospitality for which we are known worldwide. Meanwhile, the mass media and merchandising initiatives promote the same old image of a sunny country with a beautiful, tolerant and joyful people, madly in love with football and ready to be as nice as usual.

This is an attempt to reaffirm the myth of “Brazilian cordiality” alongside a new concept of political democracy, a model of shared responsibility between the state, non-governmental organisations and private corporations.

Perhaps the expected protests during the World Cup could reveal another Brazil to foreign visitors (and even to Brazilians themselves): a country of deep social, political and economic complexity, full of unpredictable potential and democratic promise, but with a population less and less willing to keep up the cheerful Carmen Miranda act of exotic beauty and foolish cordiality.

Thiago Rodrigues is affiliated with Ecopolitics Project (Nu-Sol/PUC-SP). Fernando Brancoli does not work for, consult to, own shares in or receive funding from any company or organisation that would benefit from this article, and has no relevant affiliations. This article was originally published on The Conversation. Read the original article.