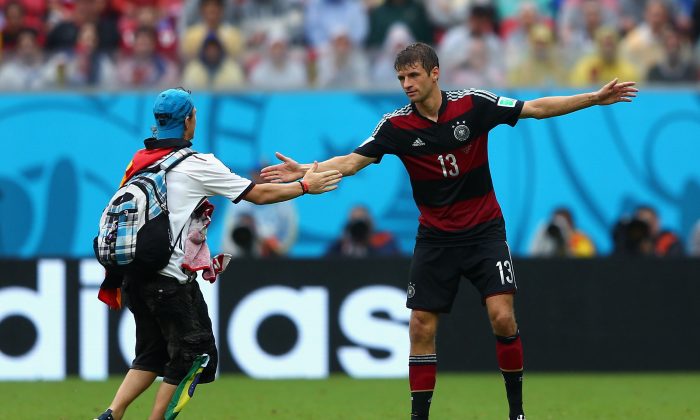 A pitch invader interacts with Thomas Mueller of Germany during the 2014 FIFA World Cup Brazil group G match between the United States and Germany at Arena Pernambuco on June 26, 2014 in Recife, Brazil. (Michael Steele/Getty Images)
Soccer

USA, Germany, Algeria, Belgium, Switzerland, France, Nigeria, and Argentina have progressed to the next stage of World Cup 2014.

Belgium and Algeria have qualified for the second round of World Cup 2014. Algeria drew Russia 1-1 to finish second, while Belgium beat Korea 1-0.

In the Group G games on Thursday, Germany beat USA 1-0, and Portugal edge out Ghana 2-1. Germany finished first and USA second on points, and will progress.

Group F table toppers Argentina and second place Nigeria will go through to the knock out stage, while France and Switzerland will move on from Group E.

The only team that did not qualify regardless of result on Wednesday is Bosnia-Herzegovina.

After the Group F matches on Wednesday, Argentina beat Nigeria 3-2, while Bosnia-Herzegovina beat Iran 3-1. This means that Nigeria and Argentina go to the second round.

In the Group E matches, Switzerland beat Honduras 3-0 to finish second in the group and move on to the knock-out round, while group leader France drew 0-0 with Ecuador.

Switzerland will face Argentina, while France will take on Nigeria in the World Cup 2014 second stage.

Check out the confirmed World Cup 2014 round of 16 bracket below. All times are Eastern Daylight Time.

See an Associated Press article on Wednesday Group E and F matches below.

World Cup: 6 Teams Vying for 3 Spots in 2nd Round

RIO DE JANEIRO (AP) — It’s Day Three of the in-or-out matches of the World Cup, with six teams battling for three places in the knockout stages.

Nigeria plays Argentina in a match where a draw suits both teams. It would put Nigeria through and ensure that Argentina finishes top of the group.

But in a World Cup that is not short of upsets, don’t write off Iran just yet.

If it beats an already-eliminated Bosnia-Herzegovina, and the Argentines beat the Nigerians, Iran has every chance of qualifying on goal difference.

His teammates called it a moment of magic when Lionel Messi fired home the only goal of Argentina’s match against Iran in stoppage time. The strike sealed their place in the last 16, with only a point needed now from the game with Nigeria to finish top.

With Argentina coach Alejandro Sabella saying he will stick with the 4-3-3 formation which Messi prefers, more fireworks should be expected from the Barcelona star.

Nigeria, which lost 1-0 to Argentina in the group stage four years ago, will have central defender Godfrey Oboabona back from injury for what should be its toughest test yet at the tournament.

As a defensive midfielder, Jon Obi Mikel will have a key role in disrupting the supply line to Messi and shielding Nigeria’s defense. Coach Stephen Keshi says he is working on a strategy for keeping Argentina’s star striker quiet for the full 90 minutes.

But he adds: “I don’t think it’s something we can share with media.”

Iran was unlucky to lose to Argentina, with Messi’s superb goal coming in injury time.

Now Iran needs to beat an already-eliminated Bosnia-Herzegovina — and hope the luck goes its way this time with Nigeria losing to Argentina in Porto Alegre.

Qualifying would then go down to goal difference, which would probably swing things Iran’s way.

For a country that has never reached the second round, Iran coach Carlos Queiroz was in no mood to downplay the importance of Wednesday’s game.

The Bosnians will leave the tournament with regrets about a refereeing decision that ruled out a strike by Edin Dzeko in its decisive 1-0 loss to Nigeria.

For now, coach Safet Susic wants his team to bow out “in a nice way”.

But he also predicted: “One day, analysts will get to understand that we needed a little luck and better referee decisions.”

NO BLUES FOR ‘LES BLEUS’

In contrast to its 2010 fiasco, when the players went on strike at their training ground, this World Cup could hardly be going better for France.

After scoring eight times in two victories, a draw with Ecuador would see “Les Bleus” ease into the second round — and they could even afford a defeat, given their current goal difference of plus 6.

With three goals so far, France striker Karim Benzema has already made his point at this tournament and may well be rested.

Midfielder Mathieu Valbuena, whose 5-foot-4-inch frame belies his presence on the field, may well be the man to watch. As defender Mathieu Debuchy said of Valbuena: “He’s pretty much decisive in every game.”

Ecuador will meanwhile turn to Pachuca striker Enner Valencia who, like Benzema, has scored three times in Brazil.

The bigger problem facing Ecuador coach Reinaldo Rueda is for his defense to keep things tight at the back. It’s a challenge he is clearly looking forward to.

“We have the motivation,” he said. “And there is joy in a match like this knowing it all depends on us if we stay in the tournament.”

FROM ALPS TO AMAZON

The key to Switzerland’s hopes is how well the players deal with the psychological blows inflicted by France’s 5-2 thrashing last Friday. The Swiss had lost just once in their 18 matches over the previous two years before being torn apart by their neighbors.

The other hurdle is for players from an Alpine nation to play football in the intense heat and humidity of the Amazonian rainforest. It’s not a hurdle that worries coach Ottmar Hitzfeld, though.

“I’m not going to change my game tactics because of the weather or climate,” the German said bluntly on the eve of the game at Manaus.

The permutations say that Honduras’ players can still qualify for the last 16. But the performances on the pitch say they can’t.

After two straight defeats, Honduras would have to pull off a major upset by beating Switzerland — and still need help from France, which would have to defeat Ecuador in the other Group E game — to go through.