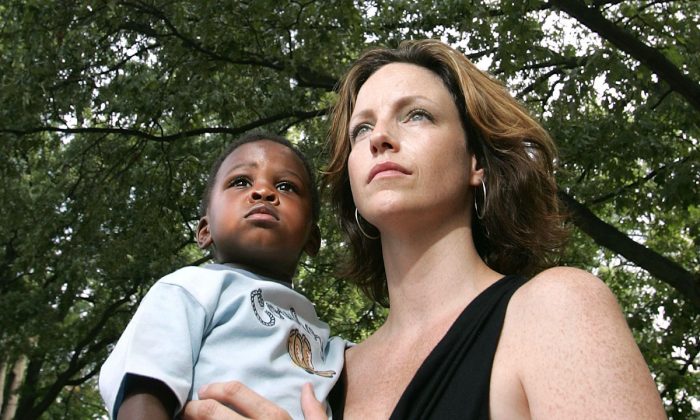 A file photo of a mother, Eden Atwood, and her son, Benjamin Anderson listening during a rally to remember the freeing of slaves in America in Memphis, Tenn. on Aug. 13, 2005. (Carlo Allegri/Getty Images)
International

May 21 is the United Nations World Day for Cultural Diversity, a time to reflect on the positive force of tolerance.

In an index of the most prosperous nations in the world, and an analysis of what makes them prosperous, the public-policy organization Legatum Institute concluded that “in countries where tolerance levels are high, prosperity flourishes.”

“As the world becomes smaller and immigration rises, tolerance towards diversity becomes a crucial issue for societies,” states the London-based institute.

A chart relating gross domestic product (GDP) growth and measures of personal freedom, shows that as one rises, so does the other. The study recognizes that a correlation does not mean a cause-effect relationship—it could be that prosperity causes tolerance rather than that tolerance causes prosperity.

The institute cites economists and case studies to support the latter. “Tolerance is good for prosperity,” is among its key findings.

Nobel Prize-winning economist Joseph Stiglitz wrote in The Price of Inequality: “Discrimination reduces the incentives for members of a particular group to make the investments that would lead to higher productivity.”

The institute also cites Richard H. Pells, history professor at the University of Texas–Austin and author of Not Like Us. Pells says American films and music appeal to a diverse audience at home, which helped them gain popularity abroad. In this case, tolerance allowed for the creation of a product with wide appeal and economic gains.

In some countries, however, “a severe economic downturn has brought about high unemployment, widespread discontent, and rising crime rates attributed, rightly or wrongly, to the presence of large numbers of immigrants,” states the Legatum report. In Greece, for example, from 2009 to 2012, the number of respondents expressing tolerance toward other cultures slid from 67 percent to 47 percent.

Robert Putnam of Harvard University has argued that diversity can negatively impact the sense of trust and cooperation among citizens, but he argues that successful societies overcome this feeling of separation.

On May 21, the U.N. is asking citizens all over the world to make an increased effort to promote diversity and tolerance.