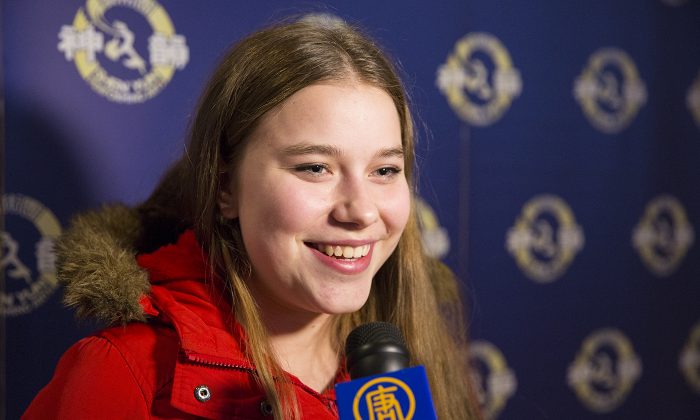 TORONTO—Carolyn Matheson is an elite athlete in a sport that requires individual finesse and perfect synchronicity.

Ms. Matheson is a synchronized figure skater who competes at the international level. She will be travelling to Europe twice this year, first to Milan, Italy, for the Spring Cup in February, and then to Zagreb, Crotia, for the World Junior Synchronized Skating Championships in March.

She is excited about that, she said, and on Thursday she saw the dancers of Shen Yun Performing Arts, another group of elite performers who also strive for perfection and unity.

“I really loved it,” she said. The performance reminded her of her own performing art and the precision that it requires.

“The lines were so straight, it’s hard to do that! But they were doing it perfectly and I was like, ‘Wow, This is amazing. I wish I could do that on the ice that perfectly.'”

She was also wowed by the flexibility of the dancers.

“We have to have that for skating as well, but I wish I was as flexible as them. I understand how much training they go through. I understand how they do all of this and I really connect with the girls on stage,” she said.

She said Shen Yun’s dancers show a bond with the music and with the emotions of each piece.

“I can see their feelings as they’re dancing,” She said. The dancers don’t just wait for the music to move, “it’s always together as one,” she said.

She was also impressed by the physicality of the dance and the feats the dancers were able to accomplish, she said.

“They jump extremely high and I don’t understand how they can do that. It looks like they’re floating. It’s beautiful, it’s absolutely beautiful. I love it.”

Shen Yun was founded on a mission to revive China’s divinely inspired culture, a heritage spanning 5,000 years that has been suppressed since the Chinese Communist Party came to power in 1949.

“I really like how they spoke about how they can’t do certain spiritual things in China, but they can do it everywhere else in the world. I can’t believe that they can’t when it’s so beautiful, and it’s so inspiring, and that really touched me.”

“It’s very important. Everything is important that I just saw. Like all their effort and everything that they went through,” she said.

Many of the dances performed are story-based mini-dramas. Ms. Matheson said the dancers bring the deeper experience of their characters to life.

“It really touched me how much they try and they push to get what they really feel.”

Classical Chinese dance involves an acting element that is different from the acting in film, drama, or theatre, explains Shen Yun’s website.

“The acting in classical Chinese dance involves coordinating facial expression with physical movement, which, when merged together, results in an amplified form of expression,” the Shen Yun said.