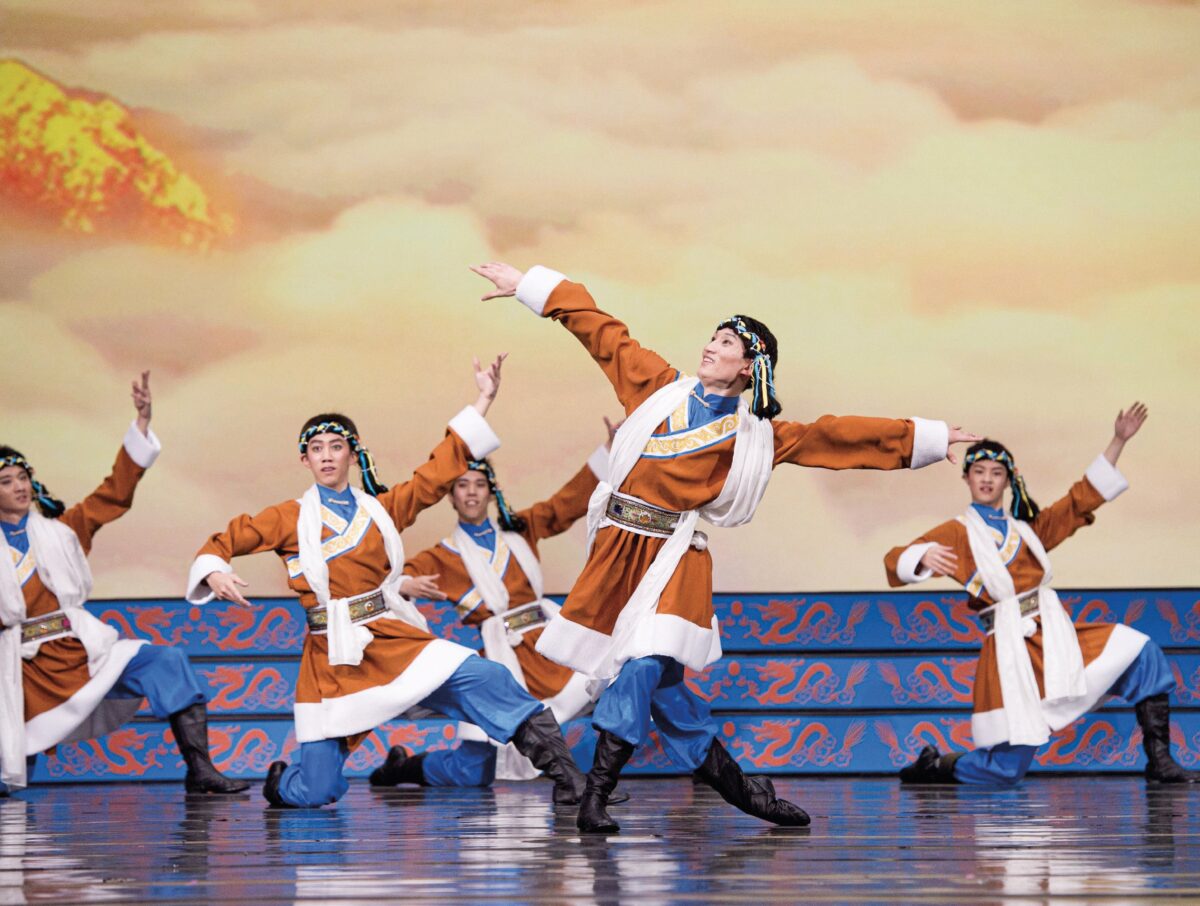 In America, world-class dancer Steven Wang discovers the true depth of his art—and its power to tell the stories of the voiceless on stage
BY Annie Wu TIMESeptember 16, 2022 PRINT

It had been a few months since Steven Wang last spoke to his parents, located halfway across the world in China. He knew that every time he phoned, the Chinese authorities would be listening in via wiretapping, so he avoided calling too often.

He started by asking simple questions, the way he always did. In these conversations, Wang couldn’t really share with his parents about his new life in America or about his recent experiences performing as a principal dancer at world-renowned theaters. The information could become ammunition for the Chinese regime, which keeps a watchful eye on those like Wang and his family who have been labeled enemies of the state because of their faith.

Wang’s mother and father have been repeatedly arrested and have spent intermittent time in jail because of their belief in a meditation practice called Falun Dafa, a self-cultivation discipline with meditative exercises and moral teachings based on the principles of truthfulness, compassion, and tolerance. In 1999, the Chinese communist regime outlawed the practice amid the movement’s rapidly growing popularity. Across the country, hundreds of thousands were rounded up and detained, often tortured while imprisoned.

On a fateful day in November 2009, Wang’s mother told him that his father had passed away. After his last imprisonment in 2003, his health drastically deteriorated—no doubt due to torture. He died of kidney failure in September 2009. “That day, I hid inside an empty warehouse and cried by myself for a long time,” Wang said. He regretted not being able to see his father one last time.

But Wang knew he had a greater mission at stake: In the land of freedom, he would tell the stories of millions like his parents who still face persecution and possibly mortal danger because of their refusal to give up their faith. Through the language of dance, Wang would convey the resilience and courage that many Falun Dafa adherents embody.

“I would think, when my father was in prison, did he experience similar torture? I imagined how a practitioner, or my father, would endure such suffering.” He would then try to display that suffering onstage.

Most recently, Wang learned that his mother was detained on July 7, 2022, at the Changsha No. 4 Women’s Detention Center, likely for distributing pamphlets about Falun Dafa, according to the Falun Dafa Information Center, which tracks persecution cases.

Wang later came to the realization that he also faced a form of persecution: the burden of uncertainty, invisible pressure, and the suffering of his loved ones. He would try to channel the emotions he felt via dance. “I hope people will understand the truth,” he said.

A Deeper Meaning Behind Dance

Wang was intrigued by dance at a young age. He grew up in Hunan Province, a place known for producing top-level gymnastics athletes. But training in gymnastics was grueling, and somehow, young Wang had a gut feeling that the sport was not for him. In 1996, when he was about 9 years old, Wang told his parents he wanted to give dance a try. His father brought him to a local arts center. When he saw the group of young classmates in their dance outfits, he felt it was the right place. Wang excelled in his class and eventually got accepted into a professional dance academy in Chongqing City—hundreds of miles away—for secondary school.

Shortly after he started dancing, Wang’s parents began practicing Falun Dafa. The practice had spread quickly across the country, with nearly 100 million adherents by the late 1990s. Wang noticed a change in his parents: They were no longer arguing the way they used to, and his father’s diabetes symptoms had disappeared.

In July 1999, the communist regime initiated its persecution campaign against Falun Dafa. Wang was too young to fully comprehend it and was far away from home. But he knew that people like his parents were being arrested and jailed because of their faith. During the  2001 Lunar New Year holiday, Wang’s parents were both arrested. He and his three elder sisters were left at home alone. “We were like orphans,” he recalled.

Seeing that the children had no one to take care of them, Wang’s aunt and uncle stayed with them for the holiday. “They pitied us and decided not to go back to their hometowns for [Lunar] New Year and stayed with us. It left a deep impression on me. I felt for the first time that our family wasn’t whole,” Wang said.

Later that year, Wang and his sisters visited their father in prison. The elder Wang was seated behind a clear barricade as guards watched intently behind him. Detainees were not allowed to talk; they could only write down messages to their visitors on a chalkboard. “He looked like skin covering bones. He looked very weak.” It was a memory Wang would never forget.

At boarding school, he was shielded from the realities of the Chinese regime’s persecution. Meanwhile, his mother and father tried to evade being arrested again. In 2008, while Wang was enrolled at a dance college in Chongqing, his mother found out about Shen Yun Performing Arts, a burgeoning performing arts company centered on an ancient art form called classical Chinese dance. Classical Chinese dance—with its unique gestures, postures, and movements—has been passed down through the ages. Its roots trace back to the imperial courts and theatrical performances of ancient China. Shen Yun, based in upstate New York, seeks to revive traditional Chinese culture through dance and music. Wang had already been learning similar dance techniques in China, and his mother encouraged him to apply for an opportunity to train and study abroad with Shen Yun.

Wang was accepted. Everything went smoothly for his trip to America. It was here that he understood the true meaning of his craft. In China, nearly everyone kept their minds focused on getting ahead. “In that society, you’re thinking about how to get a good job after graduating, to find a good job and a good salary,” Wang said. He didn’t think beyond graduating from college, getting a steady salary as a dance instructor at a school, and then making extra money by offering private lessons.

He hadn’t considered the greater significance of what dance could be. “I didn’t have a concept about what classical Chinese dance really is until I entered Shen Yun,” he said. Through the stories of legendary heroes and men of great virtue from Chinese history, Wang learned what true kindness, humility, and trustworthiness mean. He learned that personal cultivation is critical to improving one’s technical skill: “I had to be very humble. I had to be able to accept criticism, no matter where it came from.”

In China, where the communist regime has instilled atheism throughout society, “when they teach you history, they talk about how each dynasty did things incorrectly, what mistakes they made.” “They wouldn’t tell you about the good things,” Wang said. That affected the dance training. “The more negative things you learn, the dancing also becomes more negative, dark.”

Shen Yun artists have the creative freedom to explore the beauty of age-old traditions, the positive moral lessons passed down through generations, Wang said. “I realized that the traditional things are cleaner, more beautiful, and have more flavor. My attitude was full of diligence and positivity.”

There were long days and nights spent rehearsing and refining his skills. He also sustained a knee injury. But he knew that self-discipline was the key to improvement. “I only had the thought of changing myself. I didn’t feel tired. I felt my life was very enriching every day.”

Since the winter of 2008, Wang has toured around the world with Shen Yun in more than 1,000 performances. As principal dancer, he has portrayed the main character in several pieces that depict the modern-day plight of Falun Dafa practitioners in China.

During the 2010–2011 season, in a number called “The Opening of Heaven’s Gates,” Wang portrayed a practitioner who goes to Tiananmen Square in Beijing to let the public know that Falun Dafa is an upright practice. Police officers quickly charge in and tear away the banner he holds (it reads “Falun Dafa is Good”), beating him unconscious. The adherent’s steadfast faith moves celestial beings who use their powers to revive him. Those who witness the miracle praise the immense compassion displayed by the celestial beings. Inspired by divine blessings, Wang’s character expresses courage and elation.

In 2017, Wang portrayed a father who tries to protect his young infant from the Chinese policemen’s angry blows. “At the time, I tried to think from my father’s perspective: To protect my family, what would he do?”

Wang is grateful that his new home country cherishes the freedom that is so wantonly trampled on in China. “Here in the U.S., I can choose my belief and follow any spiritual practice without having to fear that I might be persecuted,” he said.

He also feels honored that through playing historical Chinese figures, he can exhibit virtuous qualities that people can learn from today. “These are universally recognized. Respect and believe in the divine. Be sincere toward people. Be humble. Practice kindness and love. Be passionate in your work, and be bright and optimistic.” Such values have been eroded in China by the communist regime, but Wang hopes to have the chance to change that: “As a proud American citizen, I hope that one day, when the Chinese Communist Party falls, we can perform in China and bring back all the traditional values that used to be part of the Chinese people.”