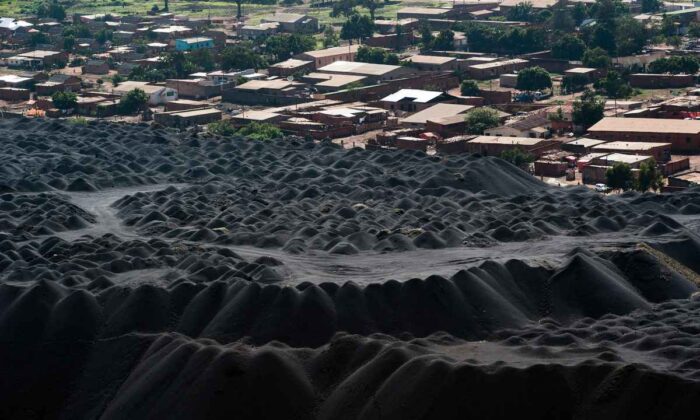 China faces setbacks in its mining investments in the DRC, Peru, and Chile
By Anne Zhang

For over a decade, Chinese companies have played an increasing role in international mining investment, spending billions of dollars buying out foreign mines worldwide.

However, Chinese mining firms have recently been facing disputes in the host countries over payments, environmental protests by locals, or government policy changes. These ongoing disputes have cost the companies dearly.

China Molybdenum owns a copper-cobalt mine in the Democratic Republic of the Congo (DRC), Chinese-controlled MMG owns the Las Bombas copper mine in Peru, and Tianqi Lithium owns significant shares of lithium ore reserves in Chile.

The Sinosure report also pointed out that the Chinese investment in copper, aluminum, rare earth, and lithium deposits worldwide could help China grow its key sectors such as new energy vehicles, high-tech manufacturing, and power equipment.

However, controlling foreign mineral deposits does come with its own risks. Chinese enterprises are frequently caught in disputes over labor, capital, and the environment in the host countries.

In addition, nations in mineral-rich Africa and South America are often politically turbulent, with their policies changing rapidly, Chinese companies can lose control of their mining operations overnight.

Payment Disputes in the DRC

On Feb. 28, a court in the DRC sidelined the Chinese state-backed mining firm China Molybdenum (CMOC) from its control of Tenke Fungurume mine (TFM), one of the world’s largest copper and cobalt mines, citing payment disputes.

According to Reuters, the ruling removed the Chinese leadership of the mine for at least six months, as the Congolese government says CMOC owes billions of dollars in payments to DRC’s state-owned miner Gécamines.

Gecamines holds a 20 percent stake in TFM and alleges that CMOC underreported hundreds of thousands of tonnes of copper and cobalt reserves, thereby depriving the state miner of the annual payments it should have received when additional reserves were discovered and verified.

After the court ruling, the share price of CMOC on the Hong Kong Stock Exchange took a dive. On March 15, its share price had dropped by over a quarter. However, it has rebounded slightly since then.

The Epoch Times reached out to CMOC for comment but has yet to receive a response.

Last August, Congo’s president, Felix Tshisekedi, named a commission to investigate allegations that CMOC might have cheated the Congolese government out of royalty payments from the mine. The legal action on Feb. 28 came after the investigation as DRC’s state-owned mining enterprise Gécamines sought removal of the Chinese management from the mine.

The DRC is the world’s richest source of cobalt. Most cobalt is mined as a byproduct of copper or nickel. According to the U.S. Geological Survey (pdf), DRC accounted for more than 70 percent of the world’s cobalt output in 2021. And China was the world’s largest consumer of cobalt, with more than 80 percent of its consumption being used in the rechargeable battery industry.

Cobalt is one of the key metals used in electric vehicle (EV) batteries; it prolongs battery life and increases energy density, which means an increased range for the EVs.

In 2016, the CCP-backed CMOC bought a 56 percent stake in the Tenke Fungurume mine for $2.65 billion. TFM was previously owned by Freeport McMoRan Inc., an Arizona-based mining company.

The TFM copper-cobalt mine is located in Lualaba Province in the DRC. CMOC’s business scope covered the mine’s exploration, mining, refining, processing, and sales of its copper and cobalt ores. The main products are the copper cathode and cobalt hydroxide.

Most of the cobalt mines in DRC are either heavily invested in or owned by the Chinese. According to the DRC Chamber of Mines, Chinese investors control about 70 percent of its mining industry.

Although DRC is the world’s largest cobalt producer and Africa’s largest copper producer, more than 60 percent of the country’s 90 million people live on under $2 a day, according to the World Bank.

In 2008, China pledged $3 billion to build infrastructures such as roads, railways, hospitals, low-rent housing, and universities in the DRC. However, according to the Congolese government, the projects currently completed and in progress amount to less than one-third of the initial commitment, according to The Africa Report.

Beijing’s failed promises and the growing anti-CCP sentiment worldwide may have played a part in DRC’s investigation into the CCP-backed mining firm.

CMOC and the Congolese government held months of talks before the court stripped the Chinese firm of management control at the mine. The company’s chief executive, Sun Ruiwen, talked for hours with Tshisekedi at the presidential palace, but the two sides have yet to reach an agreement.

In December 2020, CMOC acquired a 95 percent stake in DRC’s Kisanfu copper-cobalt mine, another of the world’s largest and highest-grade undeveloped copper-cobalt mine projects, with over 365 million tonnes of ore resources. CMOC said it expected the mine to synergize with the TFM mine, further consolidating the company’s leading position in cobalt and EV battery materials.

Protests and Road Blockades in Peru

The Las Bambas copper mine in Peru, one of the world’s largest copper mines, accounts for more than 2 percent of the global copper supply, while Peru is the second highest producer of the red metal.

Since the start of its operation in 2016, the mine has been a flashpoint of repeated protests. It frequently experiences road blockades from communities along its crucial transport route.

The blockades happen several times a year, last two weeks to several months, and seriously impact the mine’s ability to ship the mineral to clients worldwide.

According to Reuters, since 2016, communities in the Peruvian Andes have blocked the key route on and off for over 400 days, complaining that copper trucks pollute their crops and kill their animals and that the mine does not contribute financially to the well-being of local communities.

The latest blockade started on March 1 and ended on March 17, after MMG reached a temporary agreement with the communities after several days of talks.

According to MMG, Las Bombas is a high-quality open-pit copper mine with an estimated mine life of over 18 years. Its annual output of refined copper is expected to be between 300,000 and 320,000 tonnes. The acquisition of Las Bombas has made China Minmetals a top ten copper producer globally.

Peru is one of the world’s largest metals exporters and has China as its largest trading partner.

In 2019, Peru signed into Beijing’s Belt and Road Initiative (BRI), according to China’s foreign ministry. In 2020, bilateral trade between China and Peru exceeded $23 billion.

The Las Bombas copper mine is the most important asset of the Chinese state-owned Minmetals Resources and a critical project for China in the global copper market.

According to Minmetals’ earnings call last year, for the first half of 2021, the company’s EBITDA earnings were nearly $1.5 billion, and Las Bombas’s contribution alone accounted for 78.8 percent.

EBITDA, which stands for earnings before interest, taxes, depreciation, and amortization, is a measure of a company’s profitability and ability to pay off debt.

Nonetheless, the 400-day on-and-off protests and road blockades since the mine’s operation in 2016 have cost the company dearly. A three-week-long roadblock protest staged at the end of 2020 prevented MMG from exporting 189,000 tonnes of copper concentrate worth an estimated $530 million from the mine, according to mining.com, a digital news site covering the global mining sector.

In 2018, Chinese mining giant Tianqi Lithium purchased a 23.77 percent stake in Sociedad Química y Minera de Chile (SQM) Chilean lithium mine for $4.066 billion, according to Reuters, one of China’s most important lithium mine investments.

The country’s constituent assembly, a body with the power to revise its constitution, approved on March 5 an early-stage proposal that opens the door to nationalizing the copper and lithium mines in Chile.

According to mining.com, analysts consider the motion a direct attack on private interests since the Chilean state already owns the underlying mineral rights, giving the government one year to nationalize companies. And firms that work with metallic and non-metallic minerals, as well as hydrocarbons, would likely not receive indemnification for losing their mining rights.

The proposal could allow the government to target most large-scale mining of copper, lithium, and gold if it becomes Chile’s new charter through an assembly vote later this year.

Chile is the world’s top copper producer and second-largest lithium producer. The nation produced 5.6 million tonnes of copper in 2021, about 25 percent of the total generated in the world, and has a pipeline of almost $70 billion in possible mining projects this decade, much of which would never materialize if the country nationalized its resources.

Its government is also fine-tuning a new mining royalty bill, seeking to raise tariffs on firms based on gross sales and profitability, putting foreign miners in fear.

Analysts from Washington-based business advisory firm FTI Consulting (pdf) believe “if the new taxes are approved, Chilean copper mining companies could see their tax rates increase to as much as 80 percent and profit margins drop by more than 50 percent at current copper prices.”

They conclude that Chile could become the nation with the highest tax burden on mining operations, forcing foreign and domestic companies to revisit the viability of their current and future investments.