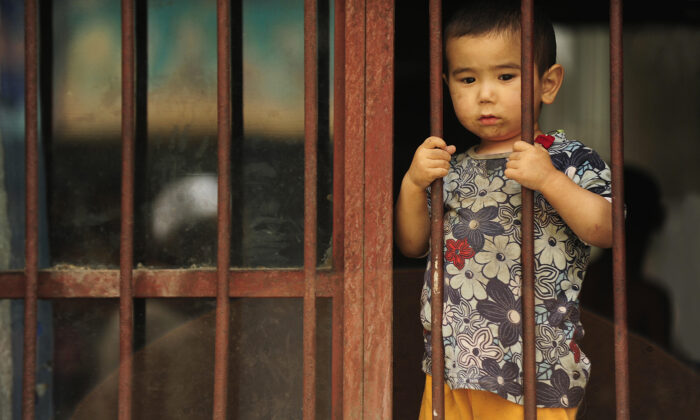 A young ethnic Uyghur boy looks out from his home in the Uyghur area in the city of Urumqi in China's Xinjiang region on July 12, 2009. (Peter Parks/AFP via Getty Images)
By Jocelyn Neo

Come Nov. 20 we all celebrate World Children’s Day with the shared goal of improving children’s welfare and upholding their rights. But are our children really well and safe? What about kids in totalitarian societies like communist China?

Since coming into power, the Chinese Communist Party (CCP)—which is rooted in atheism—has been persecuting faith and sabotaging traditional culture. Regardless of age or social status, the regime has targeted people of all faiths: be they House Christians, Falun Gong adherents, Uyghurs, or Buddhists.

Here are selected real-life stories of children in China who are persecuted because their brave parents refuse to give up their faith in the face of oppression.

1. From Heaven to Hell

Wang Jingqi’s family was a happy one until the CCP decided to persecute the Falun Gong spiritual system. Her mother, who was a Falun Gong practitioner, was arrested repeatedly and sent to forced labor camps.

Falun Gong, or Falun Dafa, is a self-improvement practice rooted in the Buddhist tradition and based on the universal principles of truthfulness, compassion, and tolerance. The practice, which consists of five sets of meditative exercises, was introduced to the public in China in 1992, and by the late 1990s, over 100 million people practiced it. Fearful of the spiritual discipline’s soaring popularity (the number of people practicing it exceeded the CCP’s membership) the former leader of the communist party, Jiang Zemin, initiated nationwide persecution in July 1999; countless adherents have been killed in the ongoing persecution.

“Our life went from heaven to hell,” Wang wrote in a personal account submitted to Minghui.org, a U.S.-based nonprofit organization that focuses on the persecution of Falun Gong in China.

“Father was very troubled. He smoked every day to escape reality. I was in college and worried about my schoolwork and Mother’s safety. I heard that she was beaten and tortured with electric batons in a detention center. I really wanted to shout at the guards to stop, but I kept quiet because it might have brought her more trouble.”

Having suffered brutal torture during the detentions, Wang’s mother was on the verge of death several times. When her mother was detained for the fourth time, her father died of a heart attack while on a business trip. Wang was devastated and needed help from her relatives to handle her father’s funeral.

“As I carried his ashes in the funeral parlor, I could not hear any noise except my own breath and heartbeat,” Wang wrote. “My mind was clear. I knew who killed my father. He had suffered so much pressure and pain. He would not have died so early if the persecution of Falun Gong had not happened.

“I do not understand why such a great practice is persecuted in China, where the constitution clearly indicates that people have freedom of belief. … [Jiang Zemin’s] order overruled the constitution and fooled most Chinese people. He kidnapped, tortured, killed, and took the organs of the most innocent and kind group in China. Tens of thousands of families, like ours, were ruined.”

Wang longs for the day when Falun Gong practitioners in China will practice freely.

In 2008, then-10-year-old Cheng Siying gave materials exposing the Falun Gong persecution to her teacher and was reported to the police. When the police arrived, one of them slapped her face in front of her classmates. Afterward, she was locked in a small iron cage, handcuffed, and shackled.

Cheng’s parents were arrested that night.

When Cheng was released, she went back to school, but her teacher forbade her from attending class and threw her school bag out of the classroom.

According to Minghui.org, the young girl had to leave her home to avoid being arrested again.

Thirteen-year-old Sheng Wei carried his three-year-old sister and traveled to the Fusong Public Security Bureau located in Baishan City, Jilin Province, to look for his mother in October 2006. His mother was arrested for telling a policeman’s wife about the persecution of Falun Gong, reported Minghui.org.

When he asked the police for his mother, they hit and kicked him, and stepped on his face with their shoes. His face became swollen and his ears started to ring. He fainted but regained consciousness shortly after.

The police carried him by his arms and legs to their car then hit and cursed him while driving him all the way home.

Wei said: “I have no mother now, and I cannot find my father. No one is taking care of us, and we have no food at home, yet you still hit me. I don’t feel like living anymore.”

Despite being in pain, he went back again the next day to ask for his mother. He was later forced into a bus and sent back home by four officers.

4. School Brainwashes Boy to Not Believe in God

A young boy stopped believing in God after attending school and even acted aggressively toward a leaflet about Christianity, according to Bitter Winter, a magazine on religious liberty and human rights in China.

The boy’s mother told the magazine how her son kept threatening her and pressuring her to give up on her belief because his teacher had said “Christianity is a xie jiao” and she “mustn’t believe in it.”

“Xie jiao” or “heretical religions” is a term used by the CCP to attack all faiths in China that lie outside of the party’s officially sanctioned state-controlled religious organizations.

“Before starting school, I told my child about God’s creation, and he believed it,” the mother said. “But after being taught at school, my child is like a different person. In atheistic China, these pure and innocent children have been taught to hate God.”

Yuanyuan of Mudanjiang City was 16 years old when the police took her to the station where her parents were detained and forced her to watch them being tortured. She was traumatized.

Neighbors said that the police often forced Yuanyuan to stand without moving under the hot sun for hours during the summer, and threatened to beat her parents if she moved, according to Minghui.org. Yuanyuan didn’t dare to move and her feet became swollen and turned purpled as a result of the torture.

Fearful of the persecution, Yuanyuan quit school and started wandering about. She even picked up food from garbage bins. She had become insane by the time her parents were released.

Wang Yanhua of Inner Mongolia was traveling back home with her husband and their two-year-old grandson in September 2021 when the security guards stopped them. Wang’s ID was flagged for practicing Falun Gong.

Frightened, the toddler froze and couldn’t say a word. The officers stopped after Wang threatened to take legal action against them. In July this year, police broke into their home and questioned her. When they were taking a photo of her, an officer also questioned Wang’s three-year-old granddaughter.

The little girl was traumatized afterward and told people that she didn’t dare to return home because the police went to her house.

7. Uyghur Children Separated From Their Parents

In 2016, Mihriban Kader and Ablikim Memtinin left their four children in their grandparents’ care and fled to Italy from Xinjiang. However, the children’s grandfather was interrogated by the police and the grandmother was sent to the re-education camp.

Seeing what happened, other relatives didn’t dare to take the children in.

“They were afraid that they would be sent to camps, too,” Mihriban told Amnesty International.

The eldest child was sent to a boarding school while the remaining three children were sent to an orphan camp.

In November 2019, the Italian government issued the couple a permit to bring their children, aged between 12 and 16, over. When the four children were traveling alone to Shanghai, the police sent them back to the boarding school and camp.

“Now my children are in the hands of the Chinese government and I am not sure I will be able to meet them again in my lifetime,” Mihriban said. “The thing that hurts most is that, to my children, it’s as if their parents don’t exist anymore; as if we passed away and they are orphaned.”

Li Qingqing of Chongqing became an orphan at the age of 9. Her father died from an illness in 2000, and her mother was persecuted to death a year later for practicing Falun Gong.

Due to the CCP’s nationwide propaganda demonizing the spiritual practice of Falun Gong, no children wanted to play with Li. Distraught, she tried committing suicide by drinking what she thought was pesticide.

Fortunately, Li survived the attempt as the substance was not a pesticide, Minghui.org reported.

Eight-year-old Qu Mingjun wrote to Minghui.org in 2001, about being pressured to sign her name for an Anti-Falun Gong petition, and felt extremely guilty over it.

“The other day, our teacher at school told us that we all should sign the Anti-Falun Gong movement,” Qu wrote. “I refused to sign. We were looking for opportunities to escape, but our teacher stood in front of us the whole time. So I was forced to sign my name. I felt like crying when I got home. Therefore, I am writing this letter to invalidate my signature.”

Minghui.org reported that Fendou Elementary School in Heilongjiang Province forced all students to sign their names, and those who refused were forced by two policemen.

A 16-year-old girl committed suicide after she realized that her father, who was arrested for practicing Falun Gong, would not be released as promised by the CCP secretary in her hometown.

According to Minghui.org, Chang Ying was told many times by the CCP secretary that her father would return home soon. In May 2005, when she discovered that she was lied to, she was devastated and poisoned herself.

In 2001, Zhang Yichao was left alone after both her parents were arrested for practicing Falun Gong, Minghui.org reported. She was just 14 years old. While living alone, a group of children, misled by the CCP’s hateful propaganda, harassed her—breaking her windows and pounding on her door. She was terrified.

Zhang was only 15 when her parents were sent to a forced labor camp. She was expelled from school and forced to live away from home. During that period, she was raped by a thug who broke into her room.

While trying to do odd jobs to survive, she contracted tuberculosis and died at the age of 18.

A four-year-old boy was denied admission to kindergarten over his grandmother’s and mother’s refusal to stop practicing Falun Gong.

The boy’s grandmother, Tao Lahuai, was a former kindergarten teacher with 33 years experience. The school and the local police had pressured Tao several times to sign statements renouncing Falun Gong. The police also went to the family’s home and harassed them. The boy’s mother, who also practices Falun Gong, asked the principal why her son was denied enrolment in the school.

“We are doing this to purify our education environment. We need to make sure you don’t spread any rumors or believe in any religion,” the principal said.

When the mother expressed her intention to file a lawsuit against the kindergarten, the principal said the admission process had been temporarily put on hold. However, the school did not follow up with the family afterward.

Jocelyn Neo
Jocelyn Neo is a writer who focuses on China-related topics and life-based stories that inspire hope and humanity.