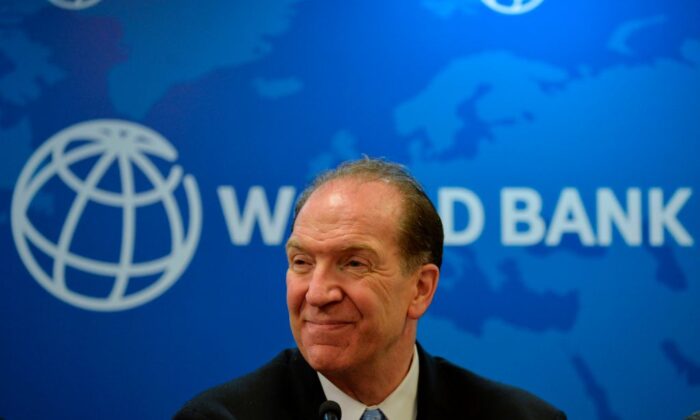 The Russian incursion into Ukraine is a “catastrophe” for the world, said the president of the World Bank, David Malpass, while warning about the negative impact of the war on global food supplies, prices, and further supply chain crunches.

Stressing that his biggest concern was the “pure loss of human lives,” Malpass pointed out that the Ukraine war comes at a “bad time” as the world is grappling with rising inflation. The economic fallout stretches beyond the borders of Ukraine, with the rising energy prices and inflation particularly hitting the poorest the most, he told BBC.

The invasion has pushed up food prices, which is a “very real consideration” for those living in poor nations, Malpass said while adding that both Ukraine and Russia are some of the largest producers of food.

Combined together, the two nations account for 19 percent of global corn supply, 29 percent of the world’s wheat exports, and 80 percent of worldwide sunflower oil exports. Around 70 percent of Russian wheat exports last year went to the Middle Eastern and African nations.

Fourteen countries currently depend on Ukraine for over 10 percent of their wheat consumption, with Lebanon importing around half of its wheat from the country. Libya imports 43 percent, followed by Malaysia and Indonesia with 28 percent each.

Ukraine’s supplies have been blocked as ports are shut down because of the conflict. Russian supplies are now restricted due to the western sanctions which make it harder for countries to buy from Moscow. “There’s no way to adjust quickly enough to the loss of supply from Ukraine and from Russia, and so that adds to prices,” Malpass said.

The disruption in Russian energy supplies is also concerning, the World Bank president said. The situation is particularly problematic for Western Europe, Malpass noted as he criticized the region’s governments for neglecting “other aspects” of generating electricity.

Roughly 39 percent of the European Union’s electricity comes from fossil fuel-burning power stations. Russia accounts for around 40 percent of the EU’s natural gas imports and about a quarter of its oil imports. Rising energy prices will push up food prices, increasing supply chain disruptions.

A decline in inventories has complicated the issue. For instance, stocks of wheat among major exporters like Russia, Ukraine, Canada, EU, Australia, United States, Kazakhstan, and Argentine are expected to fall to a nine-year low for the 2021/22 season according to the International Grains Council (ICG).

Inventories from these eight nations make up 20 percent of global inventories. Excluding Russia and Ukraine, the rest of the exporters only account for 16 percent of global wheat stocks which is just enough to feed the world for less than 21 days. Wheat futures are up by around 40 percent in 2022.

There are worries that the war will prevent many farmers in Ukraine and Russia from planting crops for the upcoming spring season, which can also negatively affect food availability.