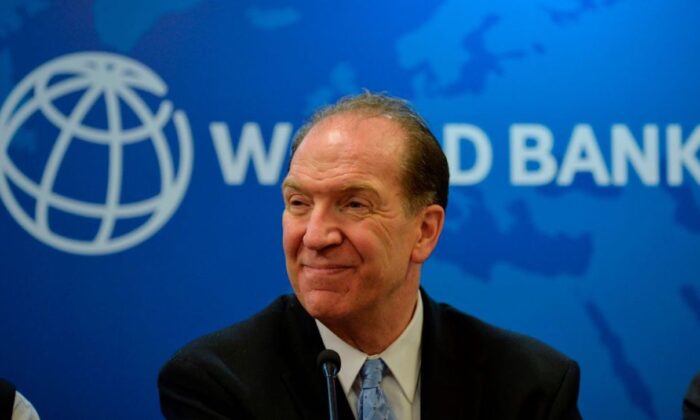 World Bank President David Malpass said that a global recession appears all but inevitable as the war in Ukraine roils on, fueling higher food and energy prices that keep broader inflationary pressures high.

Malpass made the remarks in a May 25 virtual discussion hosted by the U.S. Chamber of Commerce, which grappled with a number of overlapping global crises including ongoing supply chain disruptions and inflation.

“As we look at global GDP … it’s hard right now to see how we avoid a recession,” Malpass said. “The idea of energy prices doubling is enough to trigger a recession by itself.”

Malpass added that Russia and Ukraine were both poised to see their economic output contract sharply due to the war.

“It’s a very difficult, challenging outlook for advanced economies but even worse for developing countries,” he said, echoing the findings of a recent World Economic Forum (WEF) report in which leading economists said the world is facing a complex combination of challenges, including high inflation and greater food insecurity that could lead to social unrest in some developing nations.

His remarks came on the same day that Germany’s statistical agency released data showing that Europe’s biggest economy managed to dodge a recession in the first quarter, despite facing pandemic- and war-related pressures.

“War in Ukraine and the continuing COVID-19 pandemic have intensified existing distortions, including interruptions in supply chains and rising prices,” Georg Thiel, president of the Federal Statistical Office, said in a statement.

“Despite difficult framework conditions in the global economy, the German economy started 2022 with a slight growth,” Thiel added.

Germany’s economy contracted by 0.3 percent in the fourth quarter of 2021, though it managed to eke out a 0.2 percent pace of growth in the first quarter of 2022, narrowly dodging a recession.

A recession is typically defined as two consecutive quarters of quarter-over-quarter contraction.

Recession talk has become more widespread among analysts, with a growing chorus of experts and executives signaling the potential for a downturn.

Wells Fargo head Charlie Scharf said recently there was “no question” that the economy would see a downturn in the near future, while former Goldman Sachs CEO Lloyd Blankfein has described a “very, very high” risk of a recession.

Goldman Sachs analysts recently put the chances of a U.S. recession within the next two years at 35 percent.

In his remarks, Malpass did not predict when he thinks a global recession will begin.

Last month, the World Bank lowered its global growth forecast for 2022 by nearly a full percentage point, to 3.2 percent from 4.1 percent, citing impacts from the Russia-Ukraine conflict.

Jitters about an economic slowdown have led to sharp market selloffs.

The blue-chip Dow and the benchmark S&P 500 are down 11.6 percent and 16.5 percent year-to-date, while the tech-heavy Nasdaq has fallen nearly 27 percent as high-multiple growth stocks took a hit from rising interest rates.