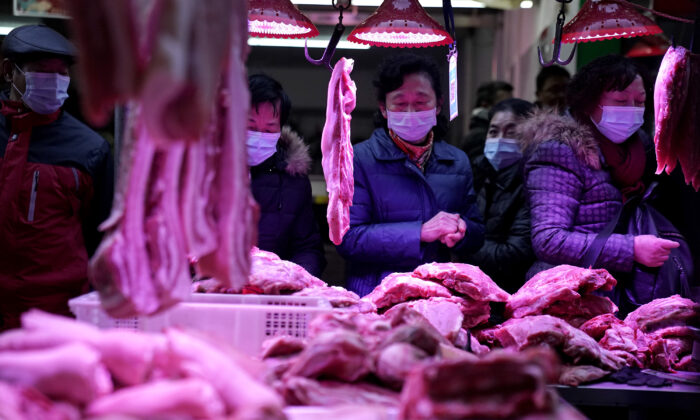 Residents buy pork to make sausage for the upcoming Chinese Spring Festival on a street famous for its sausages in Wuhan, Hubei Province, China, on Dec. 31, 2020. (Getty Images)
Beijing 2022 Olympics

Olympic athletes must “exercise extreme caution” as they eat Chinese meat, which can be contaminated with the prohibited substance clenbuterol, the World Anti-Doping Agency (WADA) warned last week.

A WADA spokesperson said its guidelines for traveling athletes “only to eat at places given the all-clear by event organizers” in countries such as China remained in place, Olympic news website Inside the Games reported.

It came after the German Anti-Doping Agency alerted its athletes to avoid Chinese meat at all cost and to seek an alternative over possible clenbuterol contamination.

Concerns over contaminated Chinese meat have existed for decades, although China banned farmers in 1997 from using clenbuterol, also known as “lean meat powder,” to feed livestock such as swine and calves. The illegal food additive was designed to produce leaner meat by speeding up muscle-building and the burning of fat.

Competitors of the upcoming Games are unlikely to have their meals outside the Athletes’ Village where they could eat such performance-enhancing foods, as Beijing started operating a closed-loop system two weeks ago. Athletes will enter the Olympic bubble upon their arrival or after 21 days in quarantine if not fully vaccinated.

According to the report, WADA said it was the “responsibility of event organizers and governments to ensure the meat available to athletes is not contaminated,” including at the Village.

Athletes could test positive in drug tests for “very low levels” of clenbuterol, the spokesperson added.

Clenbuterol, which was banned by the European Union in 1988 and the United States in 1991, can also cause serious health problems in humans including tremors, nausea, and headaches.

Yet scandals in the industry led to waves of domestic and foreign skepticism with Chinese authorities’ capacity to properly regulate food safety.

In March 2011, hundreds of Chinese people became sick from consuming pork contaminated with clenbuterol, according to the National Center for Biotechnology Information, as some pig farmers continued to illegally use the drug for profit.

In 2012, China’s General Administration of Sports issued an urgent demand telling Chinese Olympic athletes not to eat meat, over fears that they would consume clenbuterol. The announcement came after Chinese Olympic judo champion Tong Wen was banned for two years for having traces of clenbuterol in her bloodstream.

The Chinese edition of The Epoch Times has obtained a leaked document issued by the municipal top farming administration of Xi’an on Dec. 28, demanding tightened control over prohibited food additives in the central-north Chinese city upon the arrival of the Winter Olympics.

“For plantation products, the focus should be put on monitoring chlorpyrifos, phorate, and other prohibited pesticide residues,” the document reads.

“For aquatic products, the focus is on monitoring prohibited antibacterial drugs, such as nitrofurans; and antimicrobials, such as malachite green. Suspend the use of ofloxacin and conventional drugs of enrofloxacin and ciprofloxacin.”

The document lists cowpeas, Chinese leeks, and celery as three vegetables at a “high risk” of contamination.

In the past one and a half months, the municipal market watchdog of Beijing, the host city of the 2022 Games, named a range of food over safety concerns, according to a review by the Chinese edition of the Epoch Times.

The notices said local supervision departments would launch an investigation over each case.

Long Tengyun contributed to the report.