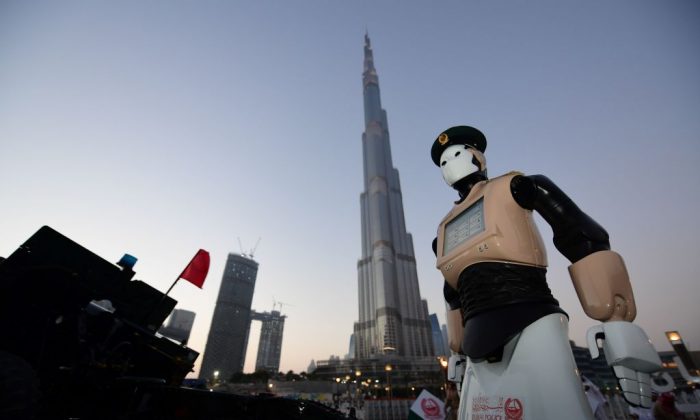 The world's first operational police robot stands at attention as they prepare a military cannon to fire to mark sunset and the end of the fasting day for Muslims observing Ramadan, in Downtown Dubai on May 31, 2017. (GIUSEPPE CACACE/AFP/Getty Images)
Tech

Top artificial intelligence (AI) and robotics experts from around the world have warned the United Nations about the potentially disastrous consequences of the international race to develop weapons controlled by autonomous computer programs.

A total of 116 company founders signed a brief yet chilling letter to the United Nations on Monday, Aug. 21, cautioning that, once developed, AI weapons “will permit armed conflict to be fought at a scale greater than ever, and at timescales faster than humans can comprehend.”

“We do not have long to act,” the group wrote. “Once this Pandora’s box is opened, it will be hard to close.

“We therefore implore the High Contracting Parties to find a way to protect us all from these dangers.”

If you’re not concerned about AI safety, you should be. Vastly more risk than North Korea.
— Elon Musk, CEO of Tesla and SpaceX

The group of experts spans four continents and is composed of founders of major AI and robotics companies, including the likes of Elon Musk, CEO of Tesla and SpaceX, and Mustafa Suleyman, co-founder of applied AI company DeepMind.

The experts warned that the technologies their companies are creating could be used by governments around the world to further develop AI weaponry. “These can be weapons of terror, weapons that despots and terrorists use against innocent populations, and weapons hacked to behave in undesirable ways,” they wrote.

Musk has been talking about the dangers of weaponized AI for years. He recently said that the threat is greater than the risk of nuclear war with North Korea.

“If you’re not concerned about AI safety, you should be. Vastly more risk than North Korea,” Musk tweeted on Aug. 11.

An AI-based pilot running on a $35 computer has already demonstrated the ability to beat a U.S. Air Force-trained fighter pilot in a combat simulator. From the July 2017 study “Artificial Intelligence and National Security,”
— Harvard Kennedy School

The world’s superpowers are racing to develop AI weapons systems, according to Human Rights Watch. United States, China, Russia, Britain, Israel, and South Korea are all vying to top each other, in what the group of expects say may become “the third revolution in warfare.”

“Unlike other potential manifestations of AI, which still remain in the realm of science fiction, autonomous weapons systems are on the cusp of development right now and have a very real potential to cause significant harm to innocent people, along with global instability,” Ryan Gariepy, the founder of Clearpath Robotics and the first signer of the letter to the U.N., told CNN on Aug. 21.

The message from AI experts was timed to coincide with a canceled U.N. meeting of government experts on AI. The meeting was postponed until November due to some member nations not paying their dues.

Australian professor Toby Walsh, who organized the letter, has urged the U.N. to ban killer robots, just as it has prohibited the use of chemical weapons.