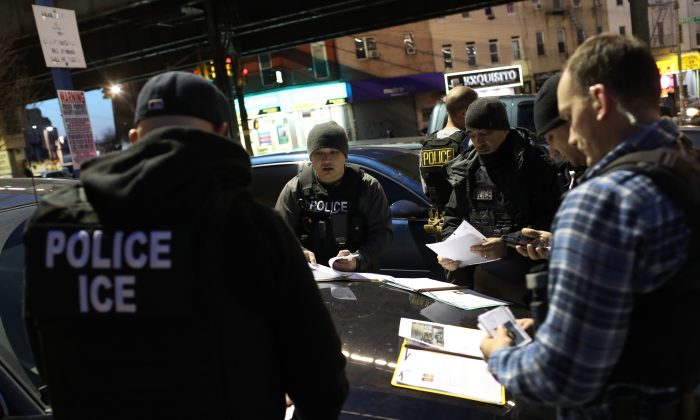 U.S. Immigration and Customs Enforcement (ICE) has ramped up investigations of employers who used illegal immigrant workers in the fiscal year 2018, which ended in September.

ICE’s Homeland Security Investigations (HSI) department arrested more than 2,300 people in 2018 related to worksite enforcement, including almost 800 criminal arrests of employers and more than 1,500 administrative arrests of unauthorized workers. That represents an increase in worksite-related arrests of about 640 percent, compared to the slightly more than 300 made the year before.

HSI opened more than 6,800 worksite investigations in fiscal 2018—about four times more than the year before.

The authorities imposed far less in fines—some $10 million in 2018, compared to nearly $98 million in 2017. That comparison, however, is misleading because the bulk of the 2017 sum came from Asplundh Tree Experts, which paid the government $95 million after a six-year HSI investigation found that the company had knowingly hired and re-hired illegal aliens.

In April, HSI raided a slaughterhouse in Bean Station, Tennessee, and arrested 104 illegal immigrants. In September, the owner of the company pleaded guilty to federal charges of tax fraud, wire fraud, and employing illegal aliens. He has agreed to pay $1.4 million in restitution, but could face additional prison time and fines when he is sentenced early next year.

In August, HSI busted a trailer manufacturer in Sumner, Texas, and arrested 160 people on immigration violations, “many who were using stolen identities of U.S. citizens,” the release stated.

“Employers who use an illegal workforce as part of their business model put businesses that do follow the law at a competitive disadvantage,” said Benner.

“HSI is committed to upholding the laws that govern worksite enforcement. These laws help protect jobs for U.S. citizens and others who are lawfully employed, reduce the incentive of illegal migration, eliminate unfair competitive advantages for companies that hire an illegal workforce, and ultimately help strengthen public safety and national security.”

Employers are required to verify the identity and work eligibility of all their hires, and to document that information on the Employment Eligibility Verification Form (I-9 form), based on the Immigration Reform and Control Act signed by President Ronald Reagan in 1986.

The brunt of HSI worksite enforcement stems from I-9 audits, where the authorities send a notice of inspection to employers, who then have three days to produce the relevant employment eligibility verification forms. ICE then conducts a compliance inspection, which can lead to civil fines and criminal prosecution for employers who break the law. Employees who are found to be in the country illegally are then arrested for deportation.

Trump already convinced Congress to allocate some $1.6 billion for border fencing in fiscal years 2017 and 2018. For 2019, the president wants at least $5 billion more to deliver on his campaign promise of building a border wall. He has repeatedly expressed a willingness to partially shut down the government if Congress doesn’t approve the funding.