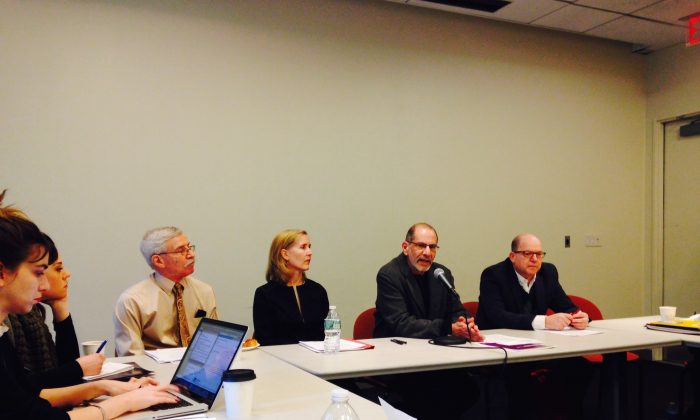 NEW YORK—An independent working group has published a report on NYU’s expansion plans. The result of 18 months’ work, the report explains why expansion is necessary, how additional space should be used, and whether the university has the means to finance the project.

NYU University Space Priorities Working Group was given the task to review the university’s expansion plan. Twenty six 26 NYU faculty and students worked on the project. Four members of the working group, including Ted Magder, Chair of the Space Priorities Working Group and Associate Professor at NYU Steinhardt, held a Q&A session Tuesday to answer questions about the final report before its public release.

The report recommended the university proceed with a new building at the Coles Sports Center site, which is located near Washington Park. Coles Sports Center site is a coveted space within the university’s core, where most of the academic buildings are located. The working group stated in its report that this redevelopment is necessary because NYU currently has an urgent need for additional space near its core.

“In the last ten years, the university has grown considerably,” said Magder. “The undergraduate body 10 years ago was about 15,000. It’s now about 22,000. Over that same period of time, the number of general classrooms in the university remained the same, at 170.”

“I think students are space-starved compared to our peer institutions,” said Mariam Ehrari, an undergraduate student in the College of Arts and Science and member of the working group.

While the university has considered building on other sites away from the Core area, the Cole site is preferred because NYU already owns the land. Finding a site of the same size elsewhere would cost around $60 million.

If the university follows through with the working group’s recommendations, the three-story Cole Sports Center building will be torn down and replaced with a much taller mixed-used building. The building will house 80 classrooms, a large theater, dedicated student study and student life spaces, a new gym, residence halls for up to 500 freshman students, and housing for roughly 100 faculty members. The space will also serve as an assembly facility for community emergencies such as Hurricane Sandy.

The report also stated that NYU’s financial planning assumptions were reasonable and within the university’s means. The cost of redeveloping the Cole site will be a little bit less than $900 million, which will be funded by budgetary surpluses, borrowing, and fundraising. The Cole Site development is only one of the capital projects listed in NYU’s spending and financing plan between 2013 and 2022. The ten-year plan comes to almost $3.2 billion. Working group members say it is unlikely that the Cole Site project will be left unfinished due to lack of funding.

“The fact that this is one among many–there’s a lot of flexibility there,” said Lawrence White, Economics Professor at NYU Stern School of Business. “If unforeseen circumstances were to hit, there could be delays in other projects, delays in some refurbishing, so that this project wouldn’t end up being that kind of hole in the ground, rain water, unfinished eyesore.”

The report recommended that the university not raise tuitions or cut salaries as a way to keep the operations going.

Members of the community criticized the initial plan submitted by NYU to redevelop an area known as the Superblocks, where the Cole site is located. Residents wanted to protect their green spaces and NYU students and faculty were concerned with extra costs.

The Superblocks consists of a rectangular piece of land that spans from West 3rd to Houston Street, and LaGuardia Place to Mercer Street. Bleeker Street separates the North Block and South Block. The city will not permit any work to be done on the North Block until 2022, but did allow redevelopment of up to 980,000 square feet in the South Block. The Cole site will not exceed the square footage allowed by the city.

The full report can be found here.