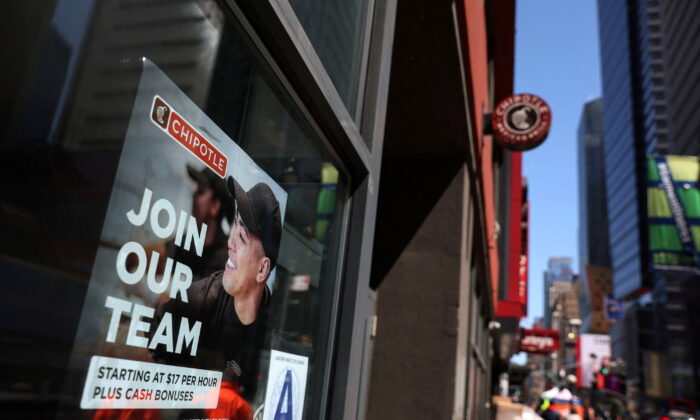 A sign for hire is posted on the window of a Chipotle restaurant in New York City, on April 29, 2022. (REUTERS/Shannon Stapleton/File Photo)
US News

As U.S. labor productivity recorded its biggest ever drop in the second quarter, some are blaming the rising trend of “quiet quitting” for the slump.

Quiet quitting simply means to stop putting in extra effort into a job, sticking to what an employee is supposed to do and nothing more. The trend is believed to have intensified in the aftermath of the COVID-19 pandemic, which forced employees to put in more effort after many of their colleagues were laid off. Workers who continued to work remotely were eventually finding it difficult to separate their work and personal lives.

Now, many employees reportedly have decided to establish a boundary as to how much effort they are willing to put into their work. A trend is emerging in the data: U.S. non-farm labor productivity fell by 4.6 percent at a seasonally adjusted annual rate in the second quarter. In the first quarter, productivity had declined by 7.6 percent.

“I think [quiet quitting] is part of the reason” for the fall in labor productivity, Barclays economist Jonathan Millar said, according to USA Today.

A March survey by Challenger, Gray & Christmas, an outplacement firm, found that almost 4 in 5 companies were experiencing employee engagement issues. A third of the companies admitted that worker disengagement was causing a drop in productivity.

A Korn Ferry survey of professionals conducted in May found that almost 50 percent of white-collar workers were turning down projects compared to before the COVID-19 pandemic.

The crux of the quiet quitting trend is the pursuit of a better work-life balance. While speaking to Fox Business, psychotherapist Amy Morin explained that some people are quiet quitting because they recognize their efforts, such as overachieving or putting in long hours at work, don’t do them any good.

“They may start to think more about what they’re missing out on rather than what they’re gaining by going above and beyond,” she said. “They might grow concerned about the impact their work is having on their mental health and decide to scale back.”

A big reason for the growing trend of quiet quitting is the ongoing labor shortage that has given employees more leverage at the workplace. In the Korn Ferry survey, for example, 62 percent of employees admitted that they have become emboldened to insist on a better work-life balance due to the labor shortage.

This is the complete opposite of what happened during the 2007–2009 financial crisis as employee productivity surged following worries of getting sacked.

The current trend of quiet quitting may end swiftly if the U.S. economy stagnates and slips into a recession, as some experts predict.

In such a situation, the leverage that employees have due to labor shortages will cease to exist, and workers who are looking to quietly quit might find themselves at the top of the list of company layoffs.