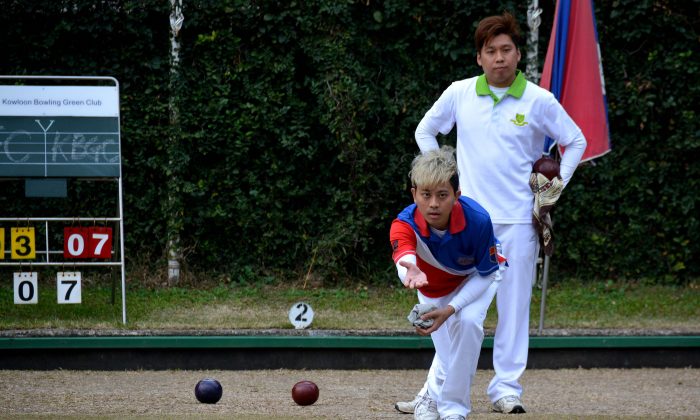 Wong Chun Yat (delivering) from Kowloon Bowling Green Club on his way to defeating Lui Chin Hong from Filipino Club in the final of the National Pairs last Sunday, Jan 25, 2015. The success also allowed Wong to regain the Bowler of the Year title he won two years ago. (Stephanie Worth)
HK Lawn Bowls

HONG KONG—Wong Chun Yat regained his HKLBA Bowler of the Year title after an emphatic victory at the National Pairs on Sunday Jan 25, 2015.

The game was played along with several finals at the second Finals Day of the year at the Kowloon Bowling Green Club, but the main focus was on the two National Pairs finals which will directly decide who will be the Bowler of the Year.

Wong and his Kowloon Bowling Green Club partner Terence Lee played Kevin Ho and Lui Chin Hong from Filipino Club. Before the game Wong is leading the BOTY table with 25 points and Lui is at fifth with 20 points. The winner of the final will take 10 points so will also be crowned Bowler of the Year.

The game started evenly until the fourth ends, when the score was tied at 3:3. Then Wong and Lee picked up the pace and won six ends in a row to open up an edge of eight points. Lui could never match the accuracy of the KBGC duo and was not able to get even closer to the game throughout. Wong finally prevailed 19:8 with an end to spare.

Wong admitted that playing at home green did give his team some advantage, despite the fact that the green is a bit tricky: “We did not start well but we have a strong will to get back into the game. Once we got the jack and played our favourite distance, my lead played really well and we just cruised.”

He is particularly happy to regain the BOTY after a quiet year last year: “When I first won this in 2012, I never thought of winning it again, especially when I don’t have good results last year. This year I decided to have a go again but it was not until I got into the last few rounds of the Pairs that I realised that there was a genuine chance for me. The fact that I was facing a competitor who also has a chance (to win the BOTY) made this final a bit special and I am glad I won it.”

The game was tight until the eleventh end, when the score was locked at 9:9. Then the CdeR duo suddenly hit form and took a five and a four in two consecutive ends. The HKFC pair did not recover from such loss and conceded the game 20:13.

Tsui was ecstatic after the win: “I never thought about the BOTY award during the game that’s why I can maintain my concentration throughout. I just tried my best in every delivery and I am glad that it materialised.

“I started lawn bowling eight years ago, but it was not until the last two years that I could dedicate more time to it. I am really happy of my achievement today and I look forward to further improve my skill,” said Tsui.

Tsui will share the BOTY award with Hong Kong Football Club’s Dorothy Yu, who has won the National Singles this season. Both players finished level on 32 point so they will be jointly named Bowler of the Year.

Bowler of the Year criteria
Operating on a points system, players were awarded points for each game that they won at the four elite national competitions—namely the Singles, Pairs, Triples and Fours, as well as the Hong Kong Bowls Classic. The player with the highest accumulation of points during a year will be the Bowler of the Year.