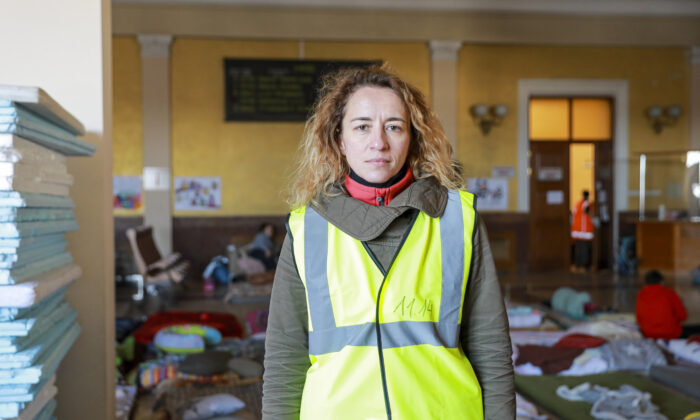 Anna Pryimenko, a volunteer, stands in a room for refugee mothers and children at the train station in Lviv, Ukraine, on March 18, 2022. (Charlotte Cuthbertson/The Epoch Times)
Russia-Ukraine War

LVIV, Ukraine—The Pryimenko family’s bags had been packed for five days on March 7, when Russia and Ukraine negotiated a green corridor for civilians to flee Sumy, Ukraine, which would open the next morning.

Vitaliy and Yekaterina Pryimenko had been waiting for a day to flee with their three sons: Kiril, 5; Yegor, 10; and Artem, 15. They had stayed put, having heard stories of civilian vehicles being shot at as they tried to escape Sumy, which is less than 25 miles from the Russian border.

Vitaliy’s mother, Valentina Pryimenko, refused to go. On the evening of March 7, she reluctantly agreed to flee after a phone call with her daughter, Anna Pryimenko, who had already fled to western Ukraine.

Anna Pryimenko’s phone rang at about midnight. Her brother’s friends told her about the bombing. She called her mother first. There was no answer. A stranger picked up the phone when she called her brother. The phone had been blown out of the house and had landed on the street.

“They said there was no house, not even the foundation. There was nothing left,” Anna Pryimenko told The Epoch Times.

Sumy has been surrounded by active fighting since Russian President Vladimir Putin ordered the invasion of Ukraine, which he has called a “special military operation.”

On the morning of March 8, local media outlets reported that nine people, including two children, were killed in the bombing. The preliminary numbers gave Anna hope, but it faded quickly.

“There were a lot of people hurt, and I hoped until the end that at least some of the children survived. During the day, they found all of them, and they were all mine,” Pryimenko said. “It was terrible, especially because we were so close. We had very strong family ties, a big, friendly family.”

The Pryimenko house stood on Romenskaya Street, deep inside a densely populated area of Sumy that’s made up of mostly single-family homes. The house was set 100 feet from the street. The front yard had stone paths, which were, during the warm months of the year, bordered with trimmed lawn.

None of that remained after the bombing, according to videos and images of the scene taken on the morning after the bombing. Large fragments of concrete and brick lay strewn throughout, powdered with snow that had fallen overnight.

Anna Pryimenko desperately wanted to return to Sumy to bury her loved ones. Her brother’s friends convinced her otherwise. Those friends took care of the burial.

“They convinced me not to do it because it would be a one-way ticket,” she said.

Her 15-year-old nephew, Artem Pryimenko, was a national champion in sambo wrestling before he died. He was planning to compete in an international competition before the bomb killed him and his parents.

“The children, they hadn’t had time to do anything bad to anyone yet,” Anna Pryimenko said. “It’s so painful and so hard to understand why this happened to my family.”

She and her husband have since moved from Uzhhgorod, Ukraine, to Lviv. They volunteer at the Lviv Train Terminal every other day. She said volunteering helps keep her mind off the losses.

On March 16, Anna Pryimenko worked in a hall at the train station dedicated to mothers with small children passing through Lviv. Most are on their way to Poland, fleeing hard-hit areas in eastern Ukraine, including Sumy.

It’s hard to look at the children, she said.