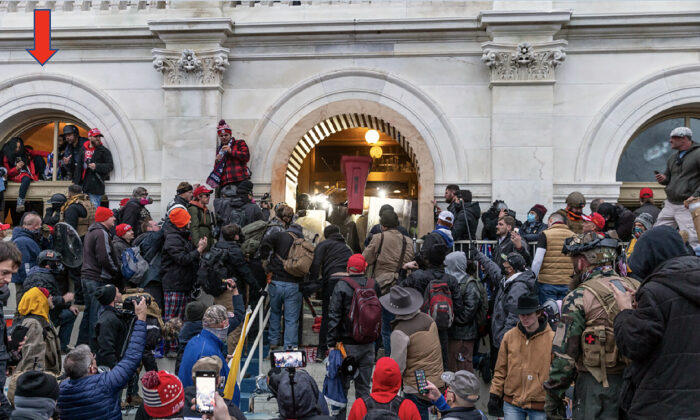 Imelda Acosta, known on social media as Mariposa Castro, entered the U.S. Capitol through a broken window on Jan. 6, 2021. (U.S. Department of Justice/Screenshot via The Epoch Times)
US News

Senior Judge Reggie B. Walton chides her for blaming Antifa and BLM for Jan. 6 violence
By Joseph M. Hanneman

A California woman who broadcast her trip through the U.S. Capitol on Facebook on Jan. 6, 2021, was sentenced to 45 days in jail and levied a $5,000 fine by U.S. District Senior Judge Reggie B. Walton, who lectured her for blaming Black Lives Matter and Antifa for some of the violence that day when that “obviously was not the case.”

Imelda Acosta, who was described in court documents by her social media name—Mariposa Castro—was sentenced in U.S. District Court for the District of Columbia on one count of parading, demonstrating, or picketing in the Capitol building, a misdemeanor. As part of a plea agreement, several other charges were dismissed.

Clips from her 47 minutes of Facebook broadcasts were played by prosecutor Jordan Konig at the sentencing hearing. Konig argued for a 60-day jail term. The government’s sentencing memo cited statements Acosta made on the live-stream, including “we’re coming” and “this is war.”

Judge Walton said jail time is a necessary punishment, to send a message to others who harbor a similar mindset.

Defense attorney Elita Amato argued in a sentencing memo that Acosta did not cause damage or engage in any violence while inside the Capitol.

Acosta told Judge Walton she is a peace-loving person who carried a peace flag with her that day. She described herself as “very empathic” and said that at the Capitol, a “dark energy … just sucked me into this.”

Judge Walton interrupted Acosta’s statement and made clear he did not believe her contentions. He chided her for references she made to BLM and Antifa on the Facebook broadcasts.

“I think it was clear to anybody who was at the Capitol on that day or who watched it on TV that these people who were doing the things that were going on that day were former President Trump’s supporters,” Walton said, “but you represented that these acts were being committed by Antifa and Black Lives Matter people.

“Now I don’t condone violence by anybody, but that was very concerning as to why you would try to blame somebody else for what obviously was not the case.”

Acosta said she was only “repeating what others were saying.”

The judge also questioned Acosta on her statement about taking back the Capitol.

“Who do you think you were taking your Capitol back from?” Walton asked.

“I was just repeating what other people were repeating and that just came out,” she said. “I don’t know what we were taking the Capitol back from. It was just something I was repeating from other people.”

Judge Walton made an extended statement before pronouncing the sentence, noting both Acosta’s actions and words were factors to consider. He expressed frustration with the political divide in America, and allegations by Trump supporters of election fraud in the 2020 presidential vote.

“These cases are difficult, because on the one hand, most of the people who got caught up in this situation don’t have prior records and seem to have lived decent lives before whatever caused them to develop the mindset to do what they did on January 6th,” the judge said. “On the other hand, it’s very troubling to me that we have people in our country who, when there is an election and they don’t get their way, that they act out in the manner that we saw take place on January 6th.”

Walton said this situation is “leading us to a very dangerous place.”

“What happens next time around? Would it be justified if whoever the Democratic candidate is runs and loses—and that’s always a possibility—that the Democratic supporters would then say, ‘Well, we think the election was stolen’ and strike out as the former president’s constituents did?”

Trump supporters have pointed out the violence by hundreds of anti-Trump leftists on inauguration day in January 2017. Rioters threw bricks and chunks of concrete at police, smashed storefront windows of downtown businesses, set fire to a limousine at the edge of the inauguration secure zone, and lit a bonfire as night fell. Police made more than 200 arrests. The DisruptJ20 coalition had announced its goal of shutting down or impeding the inauguration ceremony and the inaugural balls.

‘History is Repeating Itself’

Judge Walton, appointed to the bench by President George W. Bush in 2001, said he has been reading books about how civil wars start. He said “so much of history is repeating itself in our country,” with things happening that in other places “caused a destruction of democracy.”

“Now those same type of things are now happening in America, because we’ve got a segment of our society that it has to be their way and no other way,” Walton said. “A democratic society can’t function that way, because in a democratic society, somebody’s gonna win and somebody’s gonna lose. And historically, while people may not have been happy about having lost, they accepted that reality.”

Walton told Acosta he did not believe her 2022 statements that she was only repeating the words of others on the live streams.

“What kind of message does that send to people who may have the same mindset that you had that day?” the judge asked. “That’s a very troubling situation for this country to be experiencing. It’s concerning to me. I love this country. This country has been good to me. And to see what people are trying to do to this country for their own partisan, biased perspective is just very concerning.”

Walton stressed the need to set an example.

“The concern I have is what message do you send to others, because unfortunately, there are a lot of people out here who have the same mindset that existed on January 6th that caused those events to occur,” he said. “If people start to get the impression that you can do what happened on January 6th, you can associate yourself with that behavior and that there’s no real consequence, then people will say, ‘Why not do it again?’ ”