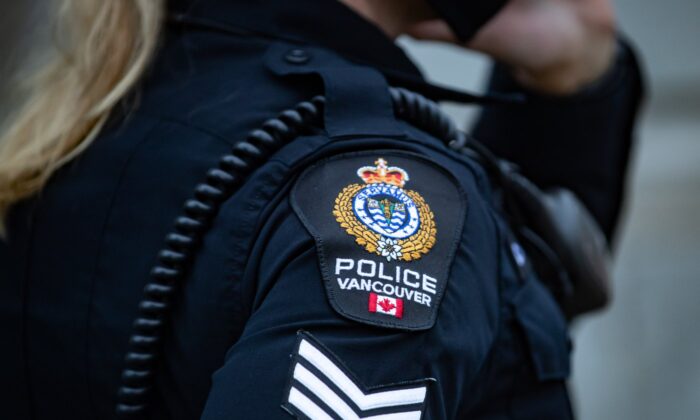 A Vancouver Police Department patch is seen on an officer's uniform in Vancouver on Jan. 9, 2021. (The Canadian Press/Darryl Dyck)
Canada

Vancouver police are investigating the incident of a 50-year-old woman reportedly having been set on fire while sitting on a sidewalk in Vancouver’s Downtown Eastside neighbourhood on July 25.

The woman was sitting near Dunlevy and Powell streets at around 1:30 a.m. when a stranger approached her, poured a flammable substance on her head, and lit it on fire, according to a Vancouver Police Department (VPD) July 27 news release.

“This was a shocking attack that targeted a vulnerable member of our community,” Constable Tania Visintin said.“We need witnesses and anyone with information to call police and help solve this crime.”

Police have confirmed that the victim is a homeless person, according to CTV News Vancouver .

She ran to a nearby business for help and was take to hospital with serious burns. The suspect, described as a white man in his 30s, fled the scene before police were called.

Vancouver’s Downtown Eastside, one of the city’s oldest neighbourhoods, has struggled in recent years with many complex issues including homelessness, crime, and drug use.

Investigators are looking into another arson incident that occurred around the same time about a 35-minute walk southwest of where the woman was attacked (map).

A man, also homeless, called police to report that a shelter structure he had built was set on fire while he was asleep near Columbia St. and West 5th Ave. between 12:30 and 1:30 a.m.

He told police that he managed to put out the fire himself and escape without injury.

Constable Visintin said that “investigators don’t believe the two incidents are connected” but noted that “it is still very early in the investigation, so we are not ruling anything out.”

Both arsons are still under investigation.