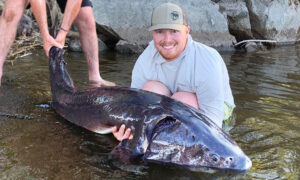 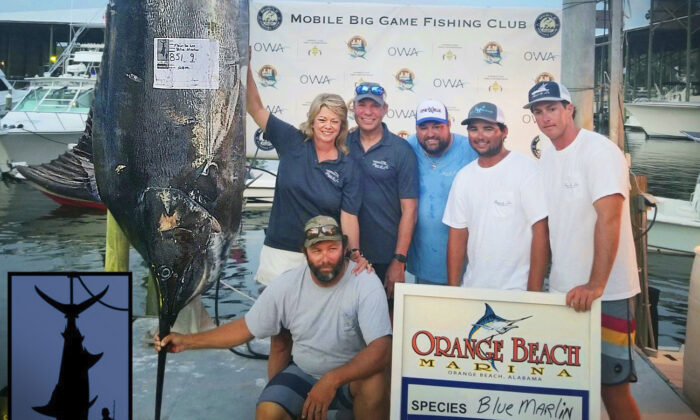 Just off the coast of Grand Isle, Louisiana, angler Ginger Myers snagged an 851.9-pound (approx. 386-kilogram) blue marlin in the Mongo Offshore Challenge, an annual fishing competition that takes place in the Gulf of Mexico.

After catching the huge fish from on board her 72-foot Viking boat, the Fleur-de-Lis, Myers became the record holder for the state of Alabama, with potentially the largest catch ever made by a lady angler in the Gulf of Mexico.

There are five categories in the competition: blue marlin, swordfish, tuna, wahoo, and mahi mahi. According to a press release from Mongo Offshore, Myers is now the blue marlin category leader in this year’s challenge.

WKRG reported that Chris Ferrera set the state’s current blue marlin record in 2013 with a catch that weighed in at 845.8 pounds (approx. 384 kg).

“We only reward the largest fish of the challenge in each category,” says Jeremy Cox, a captain with Mongo Offshore, “We have the highest minimum-size limits in the industry to qualify. Our motto is, ‘Let the small ones GO so they can GROW.’”

Myers and her crew, which consists of Captain Scooter Porto and mates Zachary Taylor and Jake Glass, reported releasing at least six other blue marlin, including one estimated at over 600 pounds (approx. 272 kg). They also released a huge yellowfin tuna before their efforts were rewarded with the 851-pound monster marlin.

Cox says that next year’s competition is already set to be bigger and better than ever, with new categories and potentially new regions, too.

“With great catches comes great stories, [which] also help attract new enthusiasts to our great sport,” he says. “Our goal is to help grow and maintain our great sport, and be good stewards of the God-given resources it depends on.”

According to Cox, catches like this one not only help bring much-needed awareness to the sport of fishing but also help fund food banks around the gulf.