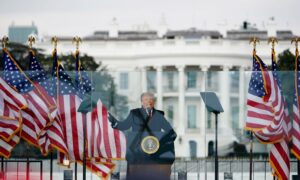 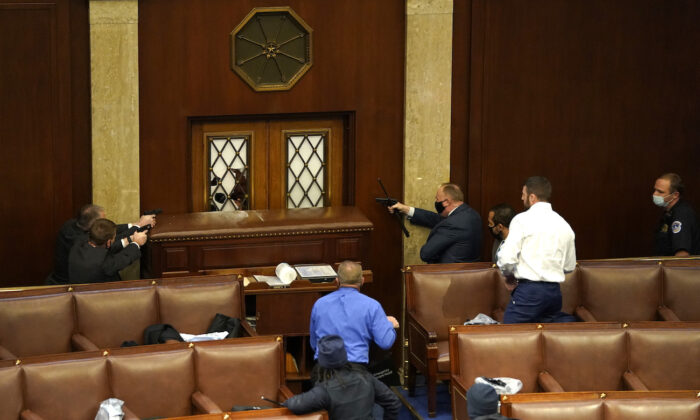 Law enforcement officers point their guns at a door that was vandalized in the House Chamber during a joint session of Congress in Washington, on Jan. 6, 2021. (Drew Angerer/Getty Images)
Electoral Vote Count

Four people have been confirmed dead on Capitol grounds late Jan. 6, among whom was a woman who died after being shot inside the Capitol building, according to DC police.

Family members have identified the woman as Ashli Babbitt (also Ashley Babbitt), an Air Force vet from California and Trump supporter. Video footage captured the moment she was struck in the chest and fell to the floor.

Babbitt’s husband told KUSI-TV that she did four tours of duty during her 14 years of service, and lived near San Diego.

Her mother-in-law meanwhile told Fox 5 DC that she owned a business in San Diego with her husband, and that she was puzzled by Babbitt’s behavior.

“I really don’t know why she decided to do this,” her mother-in-law told the news outlet, noting that Babbitt’s husband did not come to nation’s capital.

The day before she was shot, Babbitt wrote on Twitter: “Nothing will stop us…. they can try and try and try but the storm is here and it is descending upon DC in less than 24 hours….dark to light.”

It is not yet clear who was behind the shooting, however, law enforcement sources told the New York Post that she was shot by Capitol Police.

The Washington D.C. Police Department didn’t immediately respond to a request for comment by The Epoch Times.

Robert J. Contee, Chief of the Metropolitan Police Department, said during a press briefing in the early hours of Jan. 7 morning that a woman was transported to an area hospital where she was pronounced dead, without naming or identifying the victim.

Contee also noted confirmed that three other victims died near Capitol grounds in addition to the woman who was shot. He said that the causes of death cannot be determined until the individuals are seen by a medical examiner.

“We believe that there was some type of medical emergency for each of them, again, that’s very preliminary, once we know we can relay that information,” Contee told reporters.

The department said that it will investigate the shooting.

A few hours before the fatal shooting, Babbitt had retweeted a “MUST BE DONE LIST before Congress meets today.” She had also earlier retweeted television footage of Trump supporters gathering in the capital ahead of Wednesday’s planned protests.

Protesters, many dressed in pro-Trump apparel, stormed the Capitol building at around 2:15 p.m after breaking windows to get inside. Video footage shows some protesters tussling with police, others showed participants carrying American and Trump flags walking through the hall connecting the two chambers of the Capitol.

It is unclear who instigated the breach of the building.

At least 14 Metropolitan Police Department officers were injured during the clash. Two officers are in hospital, one with serious injuries after being assaulted by a crowd, and another suffered significant facial injuries after they were struck by projectile.

The breach interrupted debates in both Chambers over objections to the electoral votes from the presidential election. By 6 p.m., officials declared the Capitol building had been secured, Congress resumed shortly later.