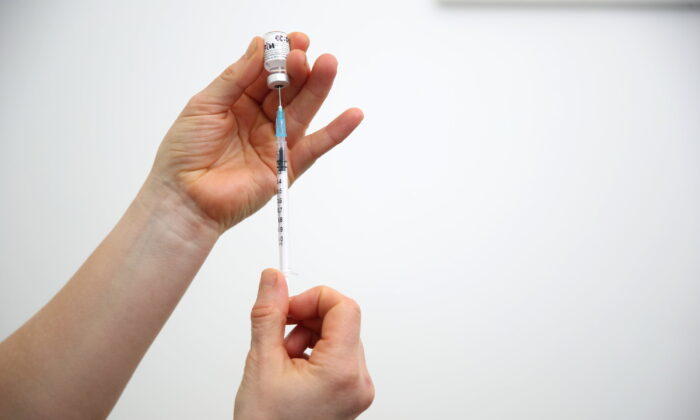 A coroner in the United Kingdom has determined that a woman died from a side effect caused by the AstraZeneca COVID-19 vaccine.

The woman was identified as 34-year-old Kim Lockwood, who had complained of a headache eight days after taking the shot in March of 2021, South Yorkshire Coroner Nicola Mundy told the BBC in a statement on March 16.

The coroner said her condition quickly deteriorated, and she was pronounced dead 17 hours after being admitted to the hospital, eight days after getting the shot.

Mundy said Lockwood was “extremely unlucky” in developing a “sudden and catastrophic” bleed on her brain. Her death was recorded at the Doncaster Coroner’s court as Vaccine-Induced Thrombotic Thrombocytopenia (VITT), officials told the broadcaster.

An article published by the U.S. National Center for Biotechnology Information says VITT is “defined as a clinical syndrome” that entails the “development of thrombosis at uncommon sites” that include cerebral venous sinus thrombosis or splanchnic venous thrombosis. Thrombosis occurs when blood clots block veins or arteries.

Lockwood’s husband, Damian, told news outlets that his wife, a mother of two, had complained that “her head felt like it was going to explode,” while her father, Wayne Merrill, recalled her last words, which he said were that her headache was “actually killing her.”

“Kim’s pain wasn’t appropriately managed, and the family should have been listened to,” Mundy said.

The UK government says there have been 438 reported cases of thromboembolic events (blood clotting) and 79 deaths to date after receiving the AstraZeneca vaccine.

Last year, officials in Edmonton, Canada, said a woman in her 50s died of VITT after receiving the AstraZeneca vaccine, which entails two doses and uses adenovirus technology. AstraZeneca’s vaccine, while common across Europe, hasn’t been approved by the U.S. Food and Drug Administration for usage.

“I am sad to report … that we have confirmed Alberta’s first death from VITT following vaccination from the AstraZeneca [COVID-19] vaccine,” Chief Medical Officer of Health Dr. Deena Hinshaw wrote on Twitter on May 4, 2021. “My sincere condolences go out to those grieving this loss.”

U.S. and UK government officials have repeatedly said that the benefits of the vaccine outweigh the risks for most people.

AstraZeneca officials didn’t respond by press time to a request by The Epoch Times for comment.