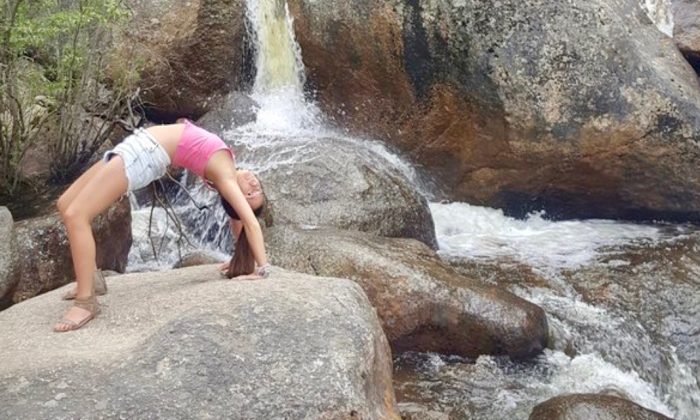 “Hot yoga” enthusiast Chisa Tolbertson plunged into a raging river while attempting a yoga pose on a dead tree.

She was alone at the time, and was carried downstream by the rushing currents. There was nobody there to pull her out, just her cell phone propped up on a rock, capturing the whole ordeal.

If the yoga picture wasn't worth it or if I don't make it on America's Funniest Home Videos it was not worth it at all pic.twitter.com/YSnBNIptTL

She fell onto her head from about five or six feet up, then was washed downstream 30 more feet. She broke nails trying to grab onto rocks and pull herself out, but eventually washed up along the opposite shore. She went back to get her belongings and had to walk across the same dead tree she fell from, Tolbertson told NTD.

Tolbertson has since posted another photo showing her doing yoga along the same river to prove she survived. This time she successfully does the “wheel pose” from a safer location.

For the record I'm alive and I got a redemption picture with said river pic.twitter.com/UBj0oYc5MQ

Tolbertson first posted the video to Twitter in May, but only this month did it skyrocket in popularity and go viral. The video has since been capturing views on Reddit, Snapchat, and on other news media sites which have shared it with their audiences.

Tolbertson first started practicing yoga when she was 10-years-old, but only started to take it seriously in 2013. When she isn’t doing yoga, Tolbertson is a 22-year-old embarking on a music career, she told NTD. She lives in Denver and has used some of her recent fame to usher people finding her via social media to her online music recordings.